Poison Ivy, female villain of DC comic fame, created by Robert Kanigher and Sheldon Moldoff, uses her toxins and phermones to put her enemies in their place; most notably, Batman. Her first kiss is poison and the second has been said to be an antedote.

Posion Ivy had no orgin story when she made her first appearance in 1966. Since then she has developped a backstory. Poison Ivy, originally Dr .Pamela Lillian Isley, was seduced by her bontony professor who injected her with toxicans that transformed her into Poison Ivy, the scantly clad eco-terrorist .

In 1966 Poison Ivy's costume was little more that a strapless green bathing suit. Vines covered her and formed her bracelet, necklace and crowns. She wore green heels and yellow-green nylons with painted leaves. After her first appearance her costume changed.

In Batman Comics in 1986 her costume was leaves that barely covered her breasts. In the New Adventures of Batman Poison Ivy is made to look more plant like. Her skin has turned a white-grey color because of the toxins in her blood stream.

The common Poison Ivy costume is a green bodice, red hair with green-gold leaves instead of eye brows, and shrouded in greenery. 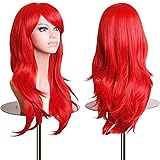 Creating Your Own Poison Ivy Costume

What I love about the Poison Ivy costume is that is fairy simple to make or create out of your own existing wardrobe. You can even make your costume more conservative than the typical vixen and still be recognized. For example, Poison Ivy, is depicted in a green strapless bodice or body suit covered in leaves but you could add some green tights or even a tank top and cover it with plastic vines.

You can stich the vines or leaves in place or adhere them with your glue gun.

You will need to change your hair up if your not a natural red head. A long flowing red wig or temporary color hair spray should do the trick. If you choose to go the wig root make sure you use a wig cap to tuck away your natural hair. You transformation will look more impressive if strands or your own hair is not poking through.

Continue to dress up your red tresses with the addition of leaves. You can easily hot glue a hair clip to the back or a leaf decoration to make it like leaves are growing out of your hair.

As for the face, the eyes are important and need to be accented. This can be done with makeup using shades of green to create a leafy appearance from the lid to the brow.

Continue to finish off the look with a pair of green boots and gloves. If you have a pair of old boots you can spray paint them green which is a lot more cost efficient than buying new boots for your event or party.

This youtube video gives you some creative ideas to create the leaf look around Poison Ivy's eyes.

Do you love Poison Ivy? - Will you sport a Poison Ivy costume this Halloween?