Seen it on Shark Tank - Now Buy It!

I am a huge fan on the show "Shark Tank" which airs on ABC. So naturally, I was wondering - how can I buy some of these awesome products I've seen on the show? I've done some digging and will show you what I've found.

Not every product is available to buy from the show, but the ones that are are very cool!

RESULT: DEAL! Barbara Corcoran offered to invest $50,000 for a 55 percent ownership in this business.

Do you remember this product from the first episode of Shark Tank?

Ava The Elephant - Talking Children's Medicine Dispenser. This is the ONLY talking medicine dispenser. Designed to make it painless for giving your kids medicine. The woman's name was Tiffany.

Did you know that Tiffany Krumins, founder of the AVA The Elephant product that was featured on Shark Tank, got cancer just after being on the show?

According to a story on the Huffington Post, Krumins got the news just months after the offer from Corcoran. "I'm in remission for my thyroid cancer, but the doctors are now fearful that I may have breast cancer," she said. Krumins is currently fighting through it. Very inspirational!

Do you remember this product? A man named Ken Bradfurd had this idea of teaching kids the states and capitals, through his flash cards. He asked for $155K for 10 percent equity. Check out the product on Amazon and the video below!

This is a healthy, gourmet diabetic product that's not just for diabetics, but anybody interested in being healthy. The founder is Jeff Cohen. Great product...what happened next was growth! He went from 35 to 600 stores across the United States and launched a line of Ultimate Energy Bars.

The Sharks, however, didn't make a deal! One of the reasons was his valuation, and because he went bankrupt personally, which wiped out his ability to raise money from the banks. This is the case of one person not getting what he wanted from the sharks, but STILL making his business a success!

"The measure of a man is not how many times you get knocked down..."

Brett Thompson and Heath Hall - Remember these guys? They are the creators of Pork Barrel BBQ and ended up getting a sweet deal with Barbara Corcoran. They gave samples of the sauce and the sharks were quite impressed.

Now an award-winning BBQ sauce, great on pork, chicken and beef, and has been voted one of the best in the nation! They have been very successful after getting a deal on Shark Tank. Great deal by Corcoran, in my opinion.

Here's a clip from the episode.

Leslie Haywood of Grill Charms - Asked for $50K in return for a 25% stake.

This is an interesting product. It's solid stainless steel charms you put in your food before you grill. The platter of food comes to the table and everybody knows what's what - well-done, medium, mild, etc. Very cool!

"Shark Tales: How I Turned $1,000 into a Billion Dollar Business" is a book written by Shark Tank's own Barbara Corcoran. The book has received 4.5 stars out of 5 on Amazon. Reviewers describe it as casual, easy to read and entertaining, motivating, and inspiring. I haven't read it yet but can't wait to get a copy!

Shark Tales: How I Turned $1,000 into a Billion Dollar Business
Buy Now

Mark Cuban is perhaps the most well-known as well-like shark on the show "Shark Tank." He is the owner of the Dallas Mavericks and is a very successful entrepreneur.

Cuban tells his own rags-to-riches story in this book. You have to start somewhere, and in this book Cuban tells us where he started and how he made it big!

How to Win at the Sport of Business: If I Can Do It, You Can Do It
Buy Now

Shark Tank Book - "The Brand Within" by Daymond John

Daymond John is another popular shark, best known as the founder of the clothing brand FUBU. This is another book I've yet to read but am dying to get my hands on. This is the kindle edition on Amazon and has received 4.5 out of 5 stars from customers!

The Brand Within
Buy Now

Mr. Wonderful wrote a book! Kevin is the head shark and perhaps the least liked as he is tough and outspoken! In this business memoir you can expect the same from Kevin - no-nonsense business.

Buy Shark Tank on Amazon Instant Video to watch all of your favorite episodes!

What do you think of this product? I happen to really like it - seems like a lot of parents would buy this product for their children!

Created by Mark Burginger, he asked the Sharks for $90K for a 51 percent stake. Very cool product:

Qubits is a cool educational toy which "helps to bring awareness to 60 degree natural geometry." Is this the construction toy of the future?

So did they make a deal? According to the ABC website, Daymond and Mark Cuban went in the deal together. Daymond likes that it is a product that is very visible and has a brand. The deal was contingent with Mark on making a deal with a major toy company. 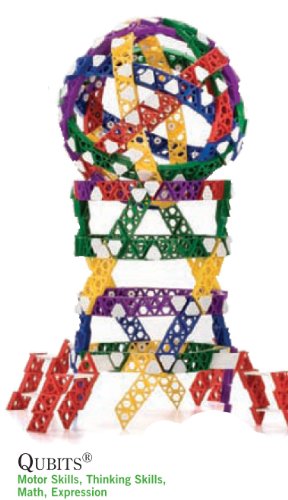 The Twister Cleaner is a portable golf ball cleaner made by Alfonzo Dowe, Sr. He asked for $85k for a 40% stake.

This product is "the one and only personal golf ball cleaning device with scrubbing bristles!" I kind of like the product, but I can see why the Sharks were a little hesitant to do a deal. There are a lot of similar products on the market, for one. Secondly, there just doesn't seem to be that big of a market for it. But I do think it''s a cool product!

Vote below for your favorite shark.

Who is Your Favorite Shark?

I personally love this show - very informative and entertaining. I think you can learn a lot about being an entrepreneur and about business by watching. What do you think?

What Do You Think of the Show "Shark Tank?"