If you're looking for old-fashioned candy, there's a company out there that will make you very, very happy -- Candy Crate, aka "Your Nostalgic Candy and Gift Store." I don't wave the flag for just any business -- trust me when I say that these guys really know what they're doing. They specialize in "crates" full of an assortment of the greatest candy of any era. Are you a child of the 70's? Then the "1970's Candy Crate" will really hit you where you live. Here's a taste of what you get in this cornucopia of retro candy: Appleheads, Bit O Honey, Boston Baked Beans, Charms Sweet & Sour Pops, Freshen Up Gum, Hot Tamales, Laffy Taffy, Pop Rocks, Razzles, and tons more. Enough to keep an true candy nostalgia fan happy for weeks.

Oh but there's more -- much, much more. Let's take a stroll down memory lane, with our cheeks bulging with Now and Laters...

I myself wasn't around in the 1940s, so this isn't exactly nostalgia for me -- but there are plenty of other folks out there who will remember the candy in this crate as if it were yesterday. Did you come up during the WWII years? Then the 1940s Candy Crate will hit you where you lived. Many of these candies have been discontinued, and that's a shame, but many of them can still be found if you know where to look. I was amazed and happy to find a full display for Bonomos Turkish Taffy in Target, of all places -- I guess the old brands are still around in one form or another. So for all you vets, baby boomers, and sock-hoppers, there's still hope that you might find the candy of your youth in the most unexpected -- and mainstream -- of places. Maybe it's just a matter of time before you can find these old-fashioned sweets pretty much everywhere.

This one really sends me back. 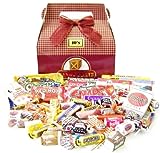 Elvis needs Boston Baked Beans! Actually, the King probably did consume his share of pretty much everything from the 1950s Candy Crate. The age of Eisenhower certainly had its sweet moments, even though much of it was of the classic and unexciting variety. This was the age of the rise of youth culture, so it follows that the candy of the 50's was starting to show the influence of youth. While candy bars were once meant to be cut into pieces and served on a plate as an after-dinner dessert, after this period they were more often bought and consumed in one sitting by a teeny bopper of one gender or another. This decade, as mooch as any other, got us started on the path of sugar consumption that we are still on to this day. don't blame the kids, necessarily, for the obesity that plagues our modern culture. Although, if you're looking for the start of it all, the fifties are as good a place as any to start...

Now we're getting into my personal territory. I remember plenty of these little wonders, especially cool stuff like Gold Mine Gum, which came in a little cloth sack that you could keep marbles in when you were done with the gum inside. The candy of the 1960s is full of great ideas like these, as the great machine of capitalism rolled into gear and started really making money off the new wave of youth culture. Many of the candy tropes that still surround us began back in the sixties, but the most dominant trend was one of size. What used to be a desert dish for an entire family -- like a Snickers or Milky Way candy bar, for example -- was now meant to be bought, pocketed, and eaten by one person. One YOUNG person. The Sixties gave us "if it feels good, do it!", and it feels good to munch down an entire candy bar by yourself! So although sugar has yet to be classified as a drug by the FDA, it could be argued that weed and sweets played a similar role in the rise of youth culture in the mid-20th century US.

Okay I'll admit it -- the 70's were pretty gross. The peace and love beauty of the naked hippies at Woodstock curdled into the bell-bottoms and bad hair of 70's rock bands, and the youth culture that seemed so promising at one point decayed into a cess-pool of drugs and ever-stupider rock and roll. Candy followed suit, and as a result the '70's produced some of the grossest candy of all time. Case in point: Lik M Aid. This stuff is still around, and I'd argue that it's the start of the "stunt candy" craze, which includes things like toilet plunger sour candy and bloody nose candy. Lik M Aid, of course, asked you to stick a moistened white paddle-thing into a little pouch of sweet-sour kool-aid-like crystals, and then lick the candy off. Lick and repeat -- it took forEVER to finish a Lik M Aid. Weird candy, weird decade. And let's not even get started on Freshen-Up gum...

Say what you will, and I know I'm going to offend some of you, but the 1980s were the least attractive decade of the 20th century. Take one look at what the female pop stars were wearing; the garish spandex, the frightened bird hair, the random bandannas. It was a tough tome to be a consumer of pop culture, and that goes double for the candy scene. There were basically no appealing candies created or popularized during the 2980's, unless you include garish, spandex-wearing sweets like Nerd and Runts and Skittles. I like Skittles, but I don't like the way they look like a dancer on Solid Gold. Let's face it, the 80's were one nasty decade, and the candy it spawned was only a part of the nastiness. 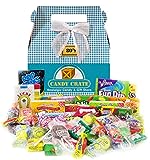 Hard to believe that the 1990s can actually be considered "retro," but here it is. This Candy Crate has a little bit of everything, from old favorites that have been around for decades to a few newcomers that have been elevated to the status of "classics."

Hope You Found Some Sweet Memories!

We all have our own special memories of candy awesomeness, whether it's Razzles at the public pool in July or Teaberry gum at Holiday time. This lens is just the tip of the iceberg. Whatever memories brig you back, there's a sweet taste that helps you get there...