What do you do when you and your friends are too old to go out have fun trick or treating? You get to have fun in a new way, by handing out candy and scaring the trick or treaters.

When I was growing up there were four of us who were all the same age who lived in our neighborhood. We had all went trick or treating together since we were little. I remember racing from house to house having a great time with my friends. One year our parents had deemed us to old for trick or treating, but we still wanted to have fun together on Halloween.

We thought about setting up a haunted house but none of our parents would agree to letting the kids go through their house. They did give us permission to use the front yard. We didn't have too much time to plan that first year but we still had a blast.

Read on if your looking for some ideas that you can use to have fun scaring trick or treaters with your friends. I will share what we did and some other ideas I have thought of since then.

This is like what we did the first year.

Scare Kids By Jumping Out From a Pile of Leaves

We didn't have much time to come up with a plan our first year. We did have a bunch of leaves on our front yard. So we raked them up into a big pile. Halloween night we took turns hiding inside the pile and when the kids walked by we would jump up out of the pile.

Although this can be funny too,as long as you are the one that is handing out the candy and not the one inside the leaf pile. Then you can have a laugh as you watch your friends fleeing in terror from the pile of leaves when they find the bugs and slugs.

So if you are the one who is going to be hiding in the leaves, I suggest you get a tarp. Then you can get inside the tarp and then cover that with leaves. It will keep you separated from the bugs and slugs.

Protect Yourself From the Bugs

This is perfect as it is big enough to cover you. Yet not so big that it will stick out. The brown color will blend in with the leaves.

Another great scary set up would involve a graveyard setting. Do you remember Michael Jackson's Thriller video? Set up a reenactment of the part of the video when the people rose from the dead, crawling out of their graves.

Put tombstones with mounds of dirt in front of them on your front yard. Have someone hiding in one of the mounds of dirt near your walkway/driveway. Then as the trick or treaters walk by have their arm reach out from the grave.

If you don't want to get dirty you could use coffins instead. Then the person could crawl slowly out of the coffin. If the trick or treaters don't notice right away slowly follow them down the walkway, making zombie noises.

These are perfect addition to a graveyard setting. 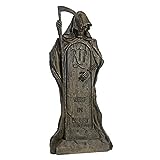 The second year we had more time to plan. So we placed a couple of fake stuffed scarecrows on the front yard. Then we put on scarecrow costumes ourselves. The kids would pass by the fake ones first and think everything was fine. Then they would get to where we were and then we would come to life and scare them.

You can use other costumes such as a grim reaper or a zombie. If you have a large porch you can do what the man in the video below did. However if you set it up on the porch make sure it is big enough that the people will not fall down the stairs when they are startled/running from you. You don't want to get sued.

How To Scare Trick or Treaters

We sat on the front yard instead as our porch is not big enough. 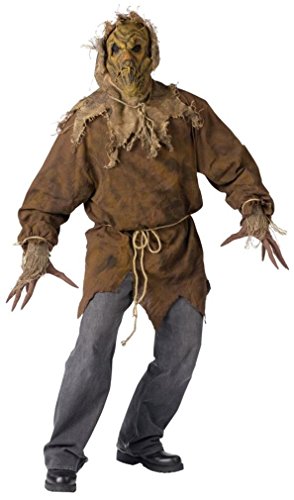 Here is a good scary scarecrow costume. It includes the shirt, belt, gloves, and mask.

For smaller kids that you just want to spook and not scare or terrify, you can make some sets of scary eyes. You take the cardboard roll from a toilet paper roll and cut scary looking eye holes into it. Then put a glow stick inside the roll. You can put these in some of your windows.

If you have bushes on your property another great way to scare the kids is to put eyes in the bushes. Put this inside your bushes and it will look like something evil is watching them from the bushes. Have someone standing behind the bushes and rattle them when someone walks past.

Do You Have Any Suggestions To Scare Trick or Treaters?