For over 20 years The Simpson's have made us laugh with their hilarious antics every week. 24 episodes of Simpson Halloween specials, called the "Treehouse of Horror", have aired and certainly prove Halloween is the Simpson family's favorite holiday. Now you can dresses as your favorite Simpsons character for Halloween! Who will you choose?

Beginning in the second season, the writers of The Simpsons were given free reign to write a Halloween episode for the series. The first episode of its kind featured Bart, Lisa, and Maggie telling ghost stories in their treehouse on Halloween night. The series got its name, "Treehouse of Horror", from this episode.

In the THOH episodes anything goes. The episode usually consists of at least 3 short segments with the writers drawing on classic tales of horror. These have included famous horror films, the works of Edgar Allen Poe, episodes of The Twilight Zone, and other well-known horror concepts. There are also spoofs and gags, including an appearance by the space aliens Kang and Kodos and the changing of the production staff's names in the credits.

The Simpsons - Treehouse of Horror
Four classic "Treehouse of Horror" episodes (V, VI, VII & XII) on this DVD. Includes "Attack of the 50 Foot Eyesores", "The Genesis Tub", "House of Whacks" and "Nightmare Cafeteria". This one-off DVD is great for those who just want to start collecting the THoH episodes or want a complete collection of Simpsons memorabilia!
Buy Now

The epitome of the 'everyman', Homer loves his family, hates his job, and spends most of his time watching TV and drinking beer. Not the sharpest tool in the shed, his catch phrase is 'D'oh'.

Normally dressed in a white short sleeved shirt and blue pants, Homer is balding and portly. He likes to wriggle his fingers, drool, and giggle like a school girl.

To Create a Homer Costume From Scratch

All you'll need is an over-sized white short sleeved shirt and blue pants, with black shoes. Stuff a pillow under the shirt to give yourself a portly appearance. Consider purchasing a Homer mask to complete your outfit or paint your face and arms yellow to put the finishing touch on your costume! Doughnuts not included. 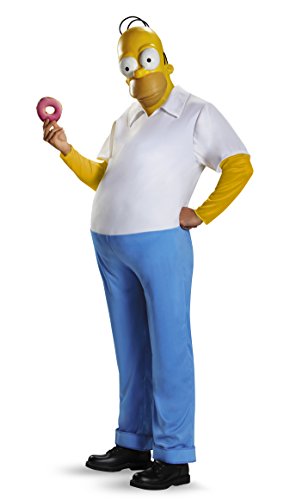 "Now if you'll excuse me I have some dust that needs busting."

Marge may be the long-suffering wife of Homer, but she loves her husband and children dearly. Every bit the nagging mother, she was once a police woman for the Springfield PD and ran her own pretzel wagon business.

Known for her trademark blue beehive hairdo, Marge is mainly seen wearing a simple green dress with red beads around her neck.

To Create a Marge Costume From Scratch

Find a length of light green fabric and make a tube-shaped dress, complete it with a string of red plastic pearls. Paint your arms and face yellow. Put in temporary blue hair dye and tease your hair into a beehive style or consider buying a tall blue beehive wig. 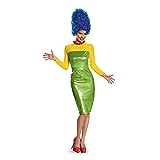 "But who'd want to hurt me? I'm this century's Dennis the Menace!"

Bart is normally dressed in a red shirt and blue shorts, sometimes with a red baseball cap. Usually with skateboard in hand. His hair is spiky and occasionally he sings Do the Bartman.

To Create a Bart Costume From Scratch

Find a red shirt and blue shorts, and a pair of sneakers. Paint your arms and face yellow or consider buying a Bart mask. Spike your hair with gel and complete the outfit with a skateboard. Cowabunga, dude! 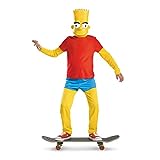 "Do we have any food that wasn't brutally slaughtered?"

The second Simpson child, Lisa is a gifted girl who has become vegetarian. She loves to stand up for what she believes in, and although he causes her a lot of trouble, loves her brother Bart and helps him out.

Lisa normally wears a red dress with a string of pearls. Her hair is short and spiky. She plays the saxophone and loves Jazz music.

To Create a Lisa Costume From Scratch

Buy a length of red fabric and cut the ends into points, creating a strapless dress. Add red buckle shoes and a string of pearls. Paint your face and arms yellow. Spike your hair and find a saxophone you can carry with you. 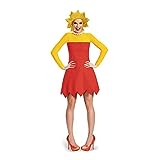 The baby of the Simpson clan, Maggie doesn't talk much but has more then a few tricks up her sleeve. She may be constantly forgotten by her father Homer, but she's a joy to her mother and never far from Marge's arms.

Maggie is usually dressed in a blue onesie pajamas, with a blue bow in her spiky hair. She's eternally sucking on a red pacifier.

To Create a Maggie Costume From Scratch

Make or find a blue onesie, add a blue bow into your spiked hair. Paint your face yellow. Complete with a red pacifier.

Which Is YOUR Favorite Simpson?

Host of the local kiddie cartoon show, Krusty is a well-known clown with a darker side. Always spending more then he can afford on gambling, he has endorsed every product imaginable. He also owns a chain of Krusty Burger fast food joints and Krusty-Lou Studios in Springfield.

Krusty is known for his curly blue-green hair, purple shirt, green pants, and big floppy red clown shoes. His face is painted white with a red nose. His catchphrase is "Hey hey hey!"

To Create a Krusty Costume From Scratch

Find a purple shirt and green pants, as well as a pair of white clown gloves and red over-sized clown shoes. A blue bow tie will complete the outfit. Paint your face white with a red nose. Try to spike your hair into a Krusty-like style and add blue-green temporary dye or consider purchasing a Krusty mask. 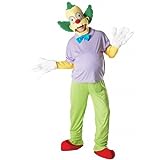 Owner of Springfield's nuclear power plant and oldest resident of Springfield, Monty Burns is a tyrant who rules with an iron fist. Homer sometimes gets the best of Burns but never for long.

Mr. Burns is usually dressed in a suit. His back hunched, his head is balding, and usually he steeples his fingers together while repeating his favorite phrase "Excellent." Almost always seen in the company of his employee Waylon Smithers.

To Create a Mr Burns Costume From Scratch

Find a blue or green suit and complete it with a pink-orange tie and black dress shoes. Hunch your back and maybe add a small pillow to create the hump Mr Burns has. Paint your face yellow or consider buying a Mr Burns mask. Arch your fingers and practice saying "Excellent!"

The local bartender and owner of Moe's Tavern (Homer's favorite hangout) Moe is never without a scheme. Usually they fail and he ends up worse off then before. He has trouble finding love and is always trying to catch Marge's eye.

Moe has curly gray hair and usually in a shirt and pants, with a stained white apron.

To Create a Homer Costume From Scratch

A short sleeved light blue dress shirt under a white apron and khaki pants with black shoes complete the outfit. Consider putting temporary gray dye in your hair and making it curly, or get a Moe mask. Paint your face yellow and finish the outfit with a blue-green bow tie and dirty bar towel.

As the spokesman for Duff Beer, Duffman is actually more than one person, as Duffman can "never die! Only the actors who play him!" Mainly known for his overly enthusiastic speech, catchphrase "Oh yeah!" and referring to himself constantly in the third person, Duffman has two children: Duffboy and Duffgirl.

Duff Beer does not acknowledge that Duffman is fictional, so as not to disillusion Duffman's fans.

To Create a Duffman Costume From Scratch

Find a blue sleeveless jumpsuit. Add a piece of red fabric to form Duffman's cape. Draw "Duff" on a piece of tape, to put on a red trucker's hat and for the front of the jumpsuit. Affix empty beer cans to a belt. Finish with white gloves and boots, and black sunglasses. Oh yeah! 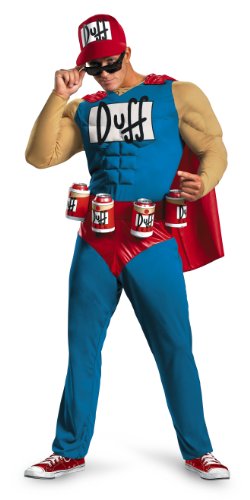 Don't have a cow, man! - Leave a comment instead!