If you're looking for some of the best "Sweet Sixteen" gift ideas, then you've come to the right place. My niece just celebrated 16th birthday last week and she was quite happy with the gifts she got from her friends and family.

I will let you know what she got and who gave it to her. That way you not only get some great gift ideas, but also what might be appropriate for you to get them based on your relationship to them. Read on to see if there is something that you think would be a good idea for the girl in your life.

Gifts From Her Friends

Most teenagers don't have a lot of money to spend for their friends birthday. So some of her friends bought her individual gifts like the photo frame and the Pillow Pet.

While the others pooled their money together to take her out for dinner on her birthday. Which they all enjoy as it makes them feel grown up. 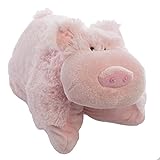 This was the one that one of her friends bought for her but there is a wide variety of animals available. They also are available in 3 different sizes- pee wee, large, and Jumbo.

This is a nice frame that she can use to display pictures of her with all of her friends.

My niece is very hard on her headphones and she had destroyed another pair just before her birthday. So I did some research to try to find a good pair of headphones, that would be more durable, but were not too expensive.

I found the MEElectronics Sport-Fi M6 Noise-Isolating In-Ear Headphones were the best choice and Amazon had them on sale for $18.34. So I bought them for her since that way she is getting a good set of headphones that are worth $50, but if she destroys them like she normally does then they weren't that expensive.

Her step brother bought her one of these very cool Gogroove speakers. If you click on the panda below it will also show you the other animals that are also available including a koala, owl, penguin, polar bear, and a tiger. 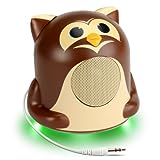 The Gogroove groove pal line of speakers are also an excellent idea. They are extremely cute and they work well.

One of the things that I gave her was a driver's handbook. At sixteen it is time to go out and get your driver's license, which means taking the test. I want to give her the best chance at not only passing the test, but being safe once she is actually driving.

DMV Test: How to Pass on Your First Try

This book has lots of information and over 200 practice questions. That way they can feel confident when they go to take the test.

Preparing For The Future

At sixteen they are growing up and looking forward to their future. There are gifts that you can give them that they will be able to take with them when they move out. My niece has wanted a cube shaped shelving unit for a long time, but they always seem to be sold out in the local stores. Now I know I can get them on Amazon. It was too late for her birthday, so I bought her Christmas present early.

My sister got her daughter some cool looking chairs for her room. That way they can have something comfortable to sit on when they visit. They are also lightweight enough that they can take them downstairs to add more seating for when all of her friends come over to watch movies. They will also be perfect for taking with her to college for her dorm room.

Furniture For Her Room 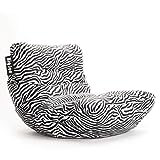 She really liked the look of this chair. 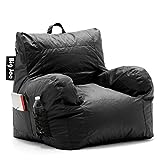 This is perfect for something to use for when her friends come over to hang out. she can also take it with her when she goes away to college. 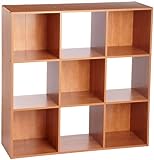 She has wanted a cube shaped wall unit for awhile. I didn't see this until after I had already bought her gifts. Now I know where to get her one for Christmas.

My niece had mentioned that she wanted something to commemorate her sixteenth birthday. Whereas I was thinking that's great, but then she'll only really be able to wear it for that one year. So I did a little research and found the perfect compromise.

Instead of having it in English I could get her what she wanted in a Kanji symbol instead. That way it says what she wants, but she will be able to wear it for years to come. Plus this was even better as it fits her style perfectly since she loves to watch Japanese Anime.

When she opened it, she liked it, but she didn't really understand it at first. Then I explained what it said and then she loved it. Apparently I should have talked to my grandmother though since she also bought her a charm for a necklace. However luckily she went with the standard English version.

Her father got her a a ring with her birthstone in it. It is a special birthday and this is something that she can wear for the rest of her life. That way as she sees him less frequently as she gets older, she will be reminded of him whenever she puts it on and takes it off.

If her birthday is in April like my nieces, then you can get something like this that has Diamonds (of April) combined with another jewel so it doesn't look like an engagement ring.

The Gift Of Choice

The one request that my niece mentioned most and a favorite choice amongst all teenagers is a gift card. Keep in mind that can go wrong as well. You need to know what they like, where they shop, or you had better choose a gift card that is open to a wide variety of choices.

In most places you can get a gift card for the local mall. That allows them to make purchases with it at any of the stores in the mall. They are only limited by which stores that they have there so try to pick a large mall. Another great choice is an Amazon gift card as then they can shop online and buy just about anything that their heart desires. 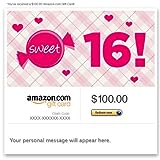 My parents (her grandparents) went with the Amazon gift card. I love that you can choose not only the amount but also the design on the gift card.

What Do You Think Is A Good Sweet Sixteen Gift?