Yes indeed my holiday tree is topped with a super snazzy rubber bat. It's one of those timeless Christmas traditions that my dad started back in the 80's...by pure accident. We don't have a special bat or anything, really any bat will do but it must be on the top of the tree or it's just not Christmas. Thinking about it I may want to find a classier looking bat...I think we can do a little better than rubber!

We also give out at least one a year to someone in the family in the gift exchange, gotta love tradition!

How it all started...

I'm sure you are wondering how the weirdest mammal on the planet has made it to the top of my tree...So here goes.

It's all my dad's fault.

My dad collected weird stuff, typically the more offensive it was the more he liked it. So naturally we had bats amongst other things hanging randomly all over our house...yes, Really. One fine December day my cat Harry (Hell bent on destroying Christmas) Knocked the tree down for the forth or fifth time...that was it. My father moved the tree to the corner were there was a hook & wired it to the ceiling...now mind you there was a bat hanging from this hook. Our day went on as usual.

Christmas eve rolls around & my aunt, grandmother & maybe a few other guests started with the "Where's your Angel" line & "Is that a Bat?!", "You can't have a Bat on a Christmas tree!!" I think, maybe, I just might have heard some racial reference to a bat & a black infant...I was 6 & my family was... well, a pack of rednecks that flung out racial slurs like most people use nouns....It was part of their Charm*.

*Charm /CHärm/ verb...used to describe horrible things my family said in the 80's with sarcasm.

However this is where they all made a serious error. You see my dad went out of his way to annoy people...this bat was the icing on the cake...or the bat atop the tree in this case. We should all just be happy the tree didn't end up under the shrunken head...and yes that really was an option.

Every year the same conversation, every year he placed the bat on the tree.

Why carry on the tradition?

Now in years past I always had a bat in the tree or out for the holidays but in 2007 my dad passed away (kicking & screaming, I might add) once he was gone someone needed to carry on his crazy attitude. Shortly after that I adopted a sibling group of boys & I wanted them to know a little family tradition that they missed out on.

My kids would have loved my obnoxious father that called me "Kid" & refused to shake anyone's hands because he was convinced they never washed them. My kids missed the gift grab where my grandmother used her cane to steal presents (and got caught) or that time we knocked the tree over fighting for a certain gift...that turned out to be a power plunger. Oh man, the fact that out of 30 adults in our house at Christmas, 29 of them chain smoked so much that we had to keep the doors open to see the other side of the room...remember this is going on during winter, in Missouri, & they were tossing the wads of gift wrap into the open fireplace to burn the trash!! (What were they thinking?!). All the while my grandfather was yelling that it was cold & to stoke the fire...which at some point made the house somewhere around 95 degrees, even with all the doors open to let the smoke out! It was so smokey in that small house that we would all be huddled by the doors gasping for cool air.

It's quite the challenge to carry on such ridiculous family traditions! I'm not nearly as dysfunctional (stop laughing, I'm really not!) as most of the older generations in my family. I want to relive all the crazy fun and pass some of it on to the kids.

We also have a rubber rat that gets passed around every year for the gift grab...my family may have some issues.

Would you add a bat to your tree? 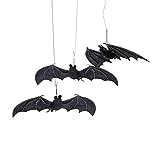 Buffy Flying Halloween Bat - With Blinking Eyes!
This exists? I think we may need one!
Buy Now