The costume parade of the Carnival of Venice, like any magnificent theatrical event, has two essential parts - the costumed performers who pose behind their masks, and the audience who revels in the annual February spectacle. Whichever side of the festival's costume parade you're on, there's nothing quite as magical as Il Carnevale di Venezia.

Welcome, friends, to the masquerade...

From a 12th century celebration of the passing of winter before the self-imposed deprivations of Lent, enveloping the theatrical pageantry of the Commedia dell'Arte and its iconic characters and costumes, the Venice Carnival adapted as the decades passed to absorb and reflect elements of Italy's turbulent history.

The extravagant costumes worn by men and women in Il Carnevale di Venezia began as a way for nobles and commoners to mingle without revealing their identities. The tradition gave rise to decadence and permissiveness that did not find favour with the Church, and for a time the wearing of masks was banned from Italy. 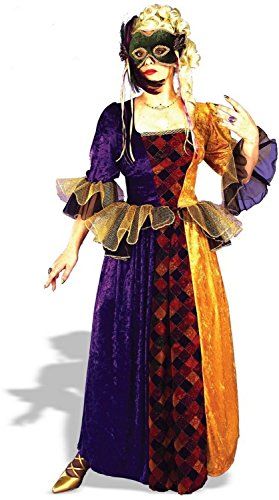 Il Carnevale di Venezia survived 150 years' hiatus before it was resurrected - gloriously, triumphantly, and with unparallelled excess in the matter of costume - in the 1970s. Today the Venetian Carnival remains as popular an attraction, for both residents of the city of Venice and visiting tourists alike, as it ever has been in its long and colourful history. And among all the breathtaking banquets and balls, the showpiece of this romantic canal city's pre-Lent celebration is surely the parade of costumes!

With weeks to go before the big celebration, AFP sent a crew out to interview some of Venice's most prestigious costume makers as they frantically worked to create the elaborate made-to-measure costumes - priced at 1500 Euros or more - that make the Venetian Carnival one of the world's most spectacular public celebrations.

Queen of the Handmade Costumes

A native of Hamburg, Germany, Tanja Schulz-Hess made her first visit to the Carnival as a tourist a decade ago, fell in love with the spectacle, and ever since has returned as an active participant.

She won the top costume prize for three years in a row in her own original handmade costumes she's designed and created herself - and the self-taught designer doesn't even know how to sew.

Believe it or not, some of Tanja's most striking costumes are made from old curtains of velvet, damask, and other rich fabrics, picked up in a flea market, and she pieces the costumes together with a glue gun. (In fact, she glued together her own wedding dress!)

Wherever she goes, Tanja Schulz-Hess draws quite a crowd - at least when she's in Venice, dressed in one of her own magnificent carnival costumes. Here, a Deutsche-Welle TV crew tracks her as she promenades through a recent Carnival in the costume of Marie Antoinette.

The distinctive masks are a centuries old tradition in Venice. Mask makers or mascherari enjoyed a special position in society, with their own laws and their own guild. During the Carnival, people were allowed to wear masks to conceal their identity from others while conversing. The best masks are papier mache or Cartapesta.

Masks have always been a central feature of the Venetian carnival; traditionally people were allowed to wear them between the festival of Santo Stefano (St. Stephen's Day, December 26) at the start of the carnival season and midnight of Shrove Tuesday.

Each of the styles has a story behind it - each has an aura of mystery and, in some cases, menace. When you look at some of the traditional designs, it's not hard to understand why the wearing of masks was banned at Carnivale for so long, and why going in masquerade here and elsewhere, even today, seems to bring out a whole different side of one's character.

Ornate Zanni Mask Green & Gold Venetian Style Halloween Masquerade
The long-nosed vaguely sinister mask of the Plague Doctor, for example, is drawn straight from Italy's history, from the dark days of the bubonic plague across Europe. With the limited medical knowledge of the time, it was believed that a mask with a cone-shaped face piece stuffed with herbs would sweeten the tainted air and keep the local physician safe from the deadly illness affecting his patience. When you see the Zanni mask, it's a elaborate nod to that dark time in the past.
Buy Now

Womens Venetian Masquerade Silver and Black Mask with Feather, Flower, and Glitter Design
Variations on the iconic sweet expressionless white-porcelain-doll mask are wildly creative, with gilt or gemstone embellishments and cutaways, ribbons and feathers, whatever the mask artist feels will express the character in a unique, attractive way that is - frankly - often a bit menacing in its immobile beauty.
Buy Now

"Life is a theater,

and we are all wearing a mask"

Useful Sites for the Traveller to Venice for the Carnival

Samo Trebizan is a professional photographer in Slovenia. In addition to his portfolio at 123RF, do have a look at Samo's website, www.nafotografiji.si and blog "On the wings of wind into eternity of a moment." These sites are full of wonderful examples of his work, along with more information about his approach to photography. Although Samo writes primarily in Slovenian, some of the material has been translated into English. Enjoy!