A Good Wine Bottle Opener Makes All The Difference

Which is the best bottle opener?

With many wines now sealed with the screw cap, there are still others that have been corked with either a 'natural' cork or a 'synthetic' one (plastic to you and me). These wines will require a wine bottle opener.

There are several different types of wine openers from the cheap-and-cheerful right up to the elegant fancy automated ones. They will all open wine, but some are better than others.

Let's take a look at some of them - most are available online.

The Waiter's Friend corkscrew has been designed for professional use, so it's strong enough to last a lifetime. A smooth 2-step opening method enables positive leverage and makes cork removal trouble-free and easy. It was designed to fit neatly into a pocket or apron.

As well as having a corkscrew, it also has a knife blade at one end, useful for removing the foil off the bottle neck first. At the other end is a can opener, which doubles as the fulcrum of the opener.

In terms of reliability, durability and portability, the 'Waiter's Friend' is the best cork puller to own. It was patented in 1882 by German inventor Karl Wienke. The spring-loaded screw is mounted in the center of the handle, with a fulcrum at one end and a short knife at the other and on the opposite edge.

Some wine bottles have only a wax seal on top of the cork. Rather than trying to pick this out by hand, just pretend it isn't there as the corkscrew goes right through without making a mess. The knife is used to remove the foil.

Open the screw. Screw into the cork taking care not to penetrate right through it to avoid getting pieces of cork in the wine. The sharpness of the tip of the wire helix worm is crucial so it will neatly pierce even a dry cork without breaking off pieces and it is guaranteed to grip and extract the cork whole.

Put the POINT of the screw in the CENTER of the cork. Do not be at all concerned about aligning the worm parallel to the bottle neck. It is more important to get the worm centered. As the worm is turned into the cork (most often clockwise), it will begin to right itself as it goes deeper. When only one turn of the worm is still visible, STOP. Bend the handle-lever down to allow opening the fulcrum. Place the fulcrum's notch on the edge of the bottle and, on the hand gripping the bottle, use the index finger to hold the fulcrum to the bottle. Use the other hand to lift the handle-lever and raise the cork about one-half inch. Turn the screw that last turn and finish lifting and removing the cork. 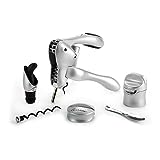 Rabbit 6-Piece Wine Tool Kit, Set, Silver
If you want perfection when it comes to opening a bottle of wine, then this beauty will do it time after time without a hitch. There is absolutely no need to remove the foil cover first, as the well designed corkscrew worm will glide straight through it and into the cork effortlessly. Place it over the bottle neck, and gently push the lever down, then lift the lever up. There is no need to put excess pressure on the unit as the ergonomic worm is self aligning and penetrates into the cork with ease. You'll even get a BONUS No Drip Wine Pourer/Stopper. I highly recommend the Metrokane Wine Rabbit.
Buy Now

Rabbit Original Vertical Lever Corkscrew Wine Opener with Foil Cutter and Extra Spiral (Candy Apple Red)
This corkscrew certainly has the WOW factor. It's one of the newest designs from Metrokane in the Rabbit family of products. This new Vertical Rabbit is as easy as placing the opener over the bottle and lowering and raising a lever. A cork can be pulled out in just 3 seconds and the unit ejects it immediately by the lowering and raising of the handle. Constructed using a chrome plated zinc dye cast handle, it has a 10 year warranty, Hi-Sheen racing-car finish in attractive candy apple red.
Buy Now

Probably the most common of all the corkscrews

A lever corkscrew consists of a lever on either side of a mechanical corkscrew. When the screw is embedded in the cork, you can push down both levers to pull out the cork. They are almost always easier to use to open wine bottles with than regular corkscrews.

Place the open circle that the corkscrew goes through over the lip of the wine bottle. This prepares the corkscrew to go into the cork.

Continue turning the corkscrew ensuring that it does not pass right through the cork. As the screw enters the cork, the lever arms will slowly rise until they are almost upright.

Hold both of the levers and pull straight down so the levers are back in the downward position. This will result in the cork pulling out in a clean movement.

Remove the lever corkscrew from around the lip of the bottle and unscrew the cork.

Elegant and effective - one of the best!

The Screwpull Classic Lever Corkscrew comes in a sliding box with a patented 4 wheel foil cutter as an extra.

This model of corkscrew has to be used to be believed. Each bottle of wine is opened quickly and efficiently with a simple up-down motion of the handle. That's all! Yes, when the unit is placed over the bottle neck, by lifting the arm the worm glides effortlessly into the cork. Then immediately, by pressing the arm down the cork is extracted.

Often imitated, the Screwpull Lever Corkscrew remains the class act which others try to follow. Coming with a 10 year guarantee, this model offers unrivaled performance due to it's rigorous testing of the perfectly shaped screw and extra strong non stick coating. 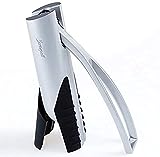 Screwpull - The best value corkscrew on the market 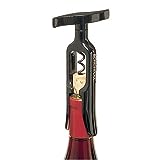 Screwpull Table Corkscrew, Black
The original self-pulling corkscrew. Screwpull invented this corkscrew in 1979. From its perfectly shaped screw, designed to glide smoothly through the toughest corks. This corkscrew actually comes in 2 parts. The body houses the screw with handle, which fits into the hole in the top end of the body unit. By placing the sides of the unit onto the top of the bottle neck, just hold the unit in place and screw the helix worm - which will automatically centre itself - into the cork. Continue the screw motion and soon the cork will smoothly ride out of the bottle all in one movement. Screwpull is renowned for its classical design of many types of corkscrew, and in my opinion, they are by far the best.
Buy Now

These corkscrews do not have 'worms' that are inserted into the cork. Instead, they have two thick prongs with one of the prongs being a bit longer than the other.

Remove the foil from the wine bottle. Ah-So corkscrews do not come with foil cutters or a serrated knife.

The original design of corkscrew

This is the most basic of all corkscrews and the cheapest, but not the easiest to use. The simplicity of it's design means that it has stood the test of time.

By screwing the worm helix into the cork in a clockwise motion four or five turns, it is then just a matter of placing the bottle of wine, usually between your legs (to get a good hold), and pulling hard.

The main drawback with the T corkscrew, is that it does not center easily over the cork, so you may find yourself screwing the worm down the side of the cork. 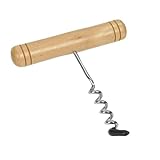 Excellante Corkscrew With Wooden Handle
Corkscrews don't get any more basic than these T corkscrews. They are simple and fairly effective, the wooden handle is well crafted to allow for a good grip.
Buy Now

The Elegance is the top of the line for the Screwpull series of corkscrews. It is efficient and looks like a work of art, and makes a fabulous gift to anyone who loves wine.

It comes with a stand, unlike most similar models, and the stand can rest on your shelf or be mounted on the wall. This corkscrew makes a statement - and rightly so - it is THE BEST.

The included Screwpull foil cutter is the best available, so for those wines still with a capsule to be removed this is a useful extra.

Once positioned over the top of the bottle neck, there is no speedier cork removal device available; it requires a bit of arm strength, but cork removal becomes very much of a show. After the cork has been pulled, it is easily released from the unit.

I call this the entertainers wine bottle opener as everything is to do with the actual extracting of the cork is effortless and almost goes unnoticed - so the wine keeps flowing!

It's been designed for private and commercial use, and a single battery charge allow for the opening of around 80 wine bottles. The Ozeri Prestige is fully cordless and also included is an elegant recharging base with an LED charging indicator. The pack comes with a free aerating pourer and foil cutter as well, the former to enhance aromas, the latter to remove wine seals.

The ergonomic rubberized grip with its new ultra light-weight design and fast motor make this bottle opener a tour-de-force in the world of opening wine bottles.

Ozeri Prestige Electric Wine Bottle Opener with Aerating Pourer, Foil Cutter and Elegant Recharging Stand
This is one opener that I haven't had first hand experience with but having seen it reviewed all over the place I feel I know a little about it. A few people noted that it doesn't always open artificial corks first time while others say that it's a breeze when opening any sort of wine closure - that's normal! The aerator and foil cutter are welcome additions, and I could certainly find them useful. As this is an electrical product, you mustn't be concerned about speed of operation it won't be seriously fast. Should the device perform at speed it could fail to extract the cork efficiently so be patient. A significant plus point is the ease of use, and anyone can pull out the most stubborn of corks effortlessly. ONE TO TRY
Buy Now