If you like blue than this X-Men Mystique costume idea for Halloween might be the perfect outfit for you to dress up in. Marvel comic's The X-Men Super Heroes are all very popular dress up costume ideas and Mystique is a unique costume for those of you who don't like the everyday and the ordinary. So, if you want a costume that will make everyone take a second look, and then a third look, choose Mystique as the character you transform yourself into. It's not the easiest Halloween look but it will be one of the most memorable costumes where ever you go!

Don't neglect the bad girl or supervillian costume ideas this Halloween. It's got to be a lot of fun dressing up as the "bad girl" and acting the part. Haven't you ever wondered what it would be like to become Mystique for a day? Well, this is your chance! Make or buy the X-Men Mystique Halloween costume for women and with a few costume accessories and lots of blue latex paint or makeup Shapeshift Yourself Into Marvel X-Men's Mystique! Also, one last reason to choose the X-Men Mystique costume is that it's one of the sexiest Halloween costumes for women you will find.

Wonder where I got this picture of Mystique? I had an artist named Vittoria draw it for me. Isn't it great?

Few X-Men characters have sultry allure of Mystique. Since her appearance in "Ms. Marvel" in 1978, the mutant Raven DarkhÃ¶lme, a.k.a. Mystique, has proved to be a formidable supervillainess.

Mystique's appearance, powers, and general motivations have remained consistent between the X-Men comic books and video games. An assassin by trade, her unique shapeshifting powers allow her to infiltrate any organization, including the X-Men.

What Can Mystique Do? What Are Her Mutant Powers?

Mystique's physical attributes have consistent between the movies and comics, including:

It's not just Mystique, you can get all your X-Men Costumes Here at BuyCostumes.com including Gambit, Beast, Magnito, Wolverine and more.

Mystique's origin varies between the X-Men movies and comics. In the comics, little is known about her other than she is at least one-hundred years old. In the movie "X-Men: First Class," Mystique is a runaway taken in as a child by Charles Xavier. She is later lured away by Magneto, a powerful mutant seeking the supremacy of mutants over mankind. 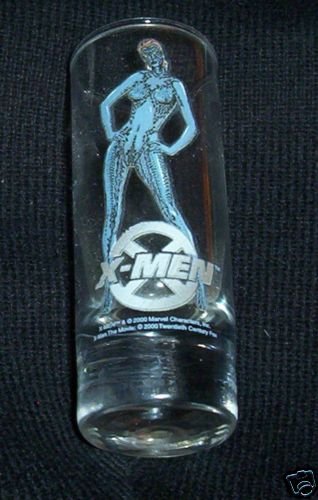 X-MEN SHOOTER GLASS MYSTIQUE Rebecca Romijn RARE
This is the perfect drinking glass for anyone who is a fan of, or who collects, X-Men Mystique merchandise. Imagine opening your cabinet and getting this glass out everyday, any real fan will be thrilled with this glass.
Buy Now

Mystique's blue skin is just one aspect of her mutation. She also heals more quickly than the average human, ages slowly and is resistant to poisons, but her hallmark ability is that of shapeshifting.

While shapeshifting, Mystique is able to

In other words, Mystique is totally cool! She is a fabulous mutant character and that's why she is known to us all as one of the leading villains in the X-Men franchise. Want to learn more about Raven Darkholme, AKA Mystique?

Who Does Mystique Hang Around With?

In the movies, Mystique's primary affiliation is with the Brotherhood of Mutants. She harbors an infatuation with Magneto and is the Brotherhood's primary spy, using her shapeshifting skills for espionage and assassination. When she feels betrayed by Magneto, however, her allegiance quickly changes.

While she founds her own Brotherhood of Mutants in the comics, her main affiliation is with an organization called the Marauders, a group of assassins headed by the mutant Mister Sinister. She later joins the X-Men only to betray them to meet her own ends. You just never know who this twisted lady is really working for, and that means no one can really trust her.

Perhaps the only aspect in which Mystique is soft is with her children. She is the adoptive mother of Rogue and has a biological son, Nightcrawler, both of whom she is very protective toward. Mystique may be the mutant queen of spies, but she is not all cold under her navy blue skin.

The actresses, so far, that have played the X-Men character, Mystique, in the movies are:

Did you know that Mystique was ranked number 18 on the IGN's list of the Greatest Comic Book Villians of all time. Number 18 is a very respectable number when you are on the list with the baddest bad guys ever! This blue mutant is quite impressive.

To create the Mystique look you are going to need lots of blue liquid latex or blue body paint. I also found some tighter than tight pants that will look like skin on you and they are in the color blue. That's one way to eliminate some of the body paint.

Sakkas FOMatteLiquid8515 Footless Ultra Slim Fit Matte Liquid Wet Look Leggings - Blue/Large
You are going to look like these matte liquid pants were poured onto you. This is the perfect pair of pants for your Mystique costume.
Buy Now

Who Is Your Favorite Mysique?

Mystique has been played by two popular and beautiful actresses, but which one is your favorite?

Who is your favorite Mystique? Rebecca Romijn or Jennifer Lawrence?

Like Mystique and want to add to your collection? Here are some great comic books and other items you will enjoy.

Draw Mystique From The X-Men

Meet Mystique In These Videos - Get Lots Of Mystique Costume Ideas!

Here are lots of videos about Mystique that you can watch to get a feel for how she would walk, talk, and act so you can become her for Halloween.

Mystique is a great Halloween costume for girls and women alike. You are going to need lots of blue...liquid latex, blue makeup, a red wig, it's going to be fun creating this X-Men Villain look and then going out dressed up like one of the baddest women known to man or mutant!

Here's how to make a homemade costume for the Mystique character. It's not a difficult look to achieve, but the blue makeup can be time consuming. Make sure to practice your look before Halloween so you know your costume will look just like you want it to.

Here's how to make a Mystique costume:

For an Authentic Mystique look you will need some FX Contact Lenses In Yellow, but they are optional.

Those are the basics. I've read other how to make a Mystique costume directions that said you can use blue ballet slippers, sequins and other fun stuff to make your costume and makeup look authentic. You can choose to include them in your costume look if you like!

3oz. Can of Temporary Spray In Hair Color (Red)
Mystique has blue skin but her hair is red as can be. Here's a spray can of red temporary hair color that's easy to use and easy to remove. Perfect for creating that red head look on Halloween.
Buy Now

Mystique is just one of the X-Men costume ideas for Halloween. Here are some of the other Mutant outfits...why not make a couples costume or even better yet, a group costume with the Marvel X-Men character costumes.