A Book Review of Tithe by Holly Black: A Dark Fantasy

Any reader will be instantly drawn into this dark fantasy tale of the mixing between the mortal realm and that which is called “faerie.” Whether a person considers him or herself a fantasy reader or not, this book is not to be disregarded. There are no wizards in this story, but a host of characters so original, yet so relatable, will intrigue the Harry Potter generation, the Forgotten Realms fans, and even those wouldn’t consider ever looking at something so fantastic.

In her debut novel Holly Black establishes herself as not only a fantasy writer, but also one who is in touch with the ways in which people feel, think, and act. The reality of the scenes she sets, whether in faerie or New Jersey, will call to the minds of the most skeptical reader. The only fault with her writing is that some might find it a bit wordy, along the lines of Francesca Lia Block.

Far from the fluff which many fantasies are composed of, this tale is not for the faint of heart. The twisting plot includes many adult themes, and the book is not recommended for children under 13. The faeries here remind you of characters from Shakespeare’s “A Midsummer Night’s Dream” or else demons, depending on which character you set as the example. They are, however, very fully developed, as are all the characters in the story. Each comes complete with faults, regrets, goals, and a host of their own little idiosyncrasies. One merit to this tale is that, unlike many urban fantasy writers, Holly Black does not give in to the temptation of excessive world-building. Instead of being told bluntly about the mystical realms and fantastic creatures, the reader gets to experience the anxiety, danger, and excitement of learning alongside the main character.

The book also gives a nod to literature with a short quote at the beginning of each chapter. There is also a short poem before the prologue which sets the tone of the story itself.

“And pleasant is the faerie land
But and eerie tale to tell,
Ay at the end of seven years
We pay a tithe to Hell;
I am sae fair and fu o flesh,
I’m feard it be mysel.”
-“Young Tam Lin”

The book is about a girl named Kaye who has recently moved from the city back to her childhood home in New Jersey. She used to imagine faeries when she was small, and now it seems that she might not have just been imagining. She meets a man named Roiben and saves his life, but when an offer of repayment goes awry, she finds that knowing a little about the world of faerie may be more dangerous than not knowing anything at all.

She goes underhill with a new friend, Corny, to find some answers and he becomes trapped, ensnared by the taste of magic. Much of the story revolves around Kaye trying to free him, make sure that none of her other friends or family become involved, and save herself. Many of these interactions involve power plays, the temptation of sin, and the cruelty of "human" nature. Again, this is not your childrens' fantasy book.

What does not revolve around Kaye and the mortal realm involves the balance, or lack of balance between good and evil in the faerie realms. The two courts of faerie have battled for ages, and introduced on the side of the Seelie court, one automatically sides with them, but lines quickly begin to blur between the good and the bad. Throughout the book the reader is kept guessing about who serves who and what side is truely the right one, if any.

A brilliant mirror of the confusion of life and the darkness of society, this book stretches the imagination and helps readers to see a world beyond their own. 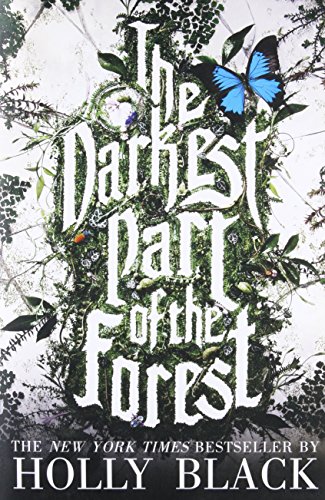 The Darkest Part of the Forest
Buy Now