A Brew to a Kill, by Cleo Coyle, a Coffeehouse Mystery

The city was enjoying one of those glorious stretches of early summer weather . . . when . . . a magical light seems to soften New York's hard edges.

I tried my best to drink in that gentleness, that calm.

A peaceful evening in Greenwich Village is ruined by an obnoxious cupcake huckster.

Claire believes the cupcake huckster may also have ruined the health and jeopardized the life of her friend, Lily Beth Tanga.

" . . . afternoons are sunny and clear, and nights are pleasantly temperate.

"Madame and I were perched between the two --- the warmth of midday and the chill of midnight."

Madame and Claire agree that the Muffin Muse (the Blend's mobile coffee truck) should expand.

They are discussing how to get Matteo to agree.

Matteo is Clare's ex-husband, business partner and "baby daddy," for a baby (Joy) who is about twenty years old now.

Madame suggests that it is Claire's duty to "handle" Matt.

Claire feels that perhaps Madame would be better at "handling," Matt.

After all, Madame is Matt's mother.

Madame reminds Claire that Claire and Matt will someday be the co-owners of the coffeehouse. When that time comes, Clare will have to do the "handling."

Claire does not want to think about losing Madame. Madame has also been like a mother to Clare herself, as much as a mother in-law. Nevertheless, Madame does convince Clare to try talking to Matteo herself.

A Brew to A Kill 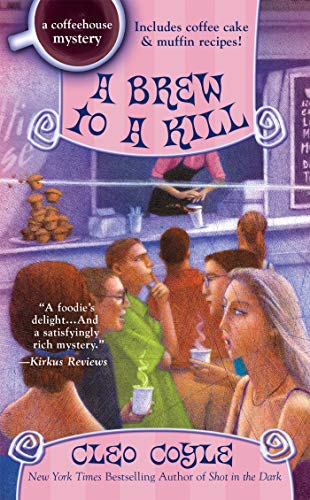 A Brew to a Kill (A Coffeehouse Mystery)
Buy Now

The truck solves the problem of choosing a dud location or having a hot neighborhood go cold. If one area doesn't produce a steady customer stream, we simply drive to a new one.

Shy from the kiosks

Clare brings in reinforcements. She invites her friend, Lily Beth Tanga, to help talk to Matt.

The "talking" turns out to be more like flirting, but what else does anyone expect from Matteo

Lily Beth goes along with the flirtation as well. Clare wonders how much is artifice and how much real. But, no matter, as long as the Muffin Muse gets a facelift.

"Clare . . . We tried expanding once. Remember my kiosks in high-end clothing stores? I do, and not with feelings of nostalgia, either. We lost a bundle."

For more than four decades, my West Village neighborhood . . . existed under . . . laws protecting its historical integrity. Generally speaking, it was a neon-free zone, a picturesque respite from the city's flash and zoom.

Dante and Esther pull up in the Muffin Muse behind Kaylie..

Next to Dante sat my Rubenesque goth girl Esther Best (shortened by her grandfather from Bestovsky). A locally renowned slam potess, Esther was an NYU grad student whose latte art skills were close to national competitive level. . . . More offbeat than Dante, she was far less sweet --- a hitch in character that often proved an asset in New York retail.

Adjusting her black-framed glasses,[Esther] cleared her throat and let it rip---

"Listen up,bouffant brain! Are you listening? Good! 'Cause you're not in Kansas. You're in my 'hood. . ."

"Your cupcakes are mealy, your 'elan is fake, and your infantile jingle gives the world an earache."

"You sell the world pink, with a cheap, plastic smile, but there's no heart in your mart. You got no class, no style. Your frosting, I hear, comes out of a can. And your beans? Sorry, honey, you can't brew worth a dang! So get your buttercream butt off my grass, or I'll plant my big black boot in your prissy little --- " 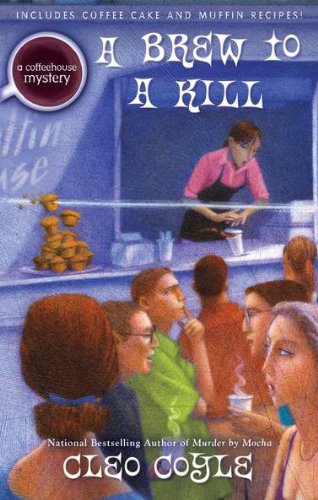 A Brew to a Kill (A Coffeehouse Mystery)
Buy Now

My heart raced as I hurried around our parked truck, Matt following. In tandem, we halted.

With one more step, chaos would begin. But for this numbing fragment of time, the planet stopped turning, my limbs went rigid, and my vision tightly narrowed.

The body of my friend, the one who'd laughed with me and held me in a hug, lay crumpled and broken in the middle of the street, the bottom half of her form twisted and twitching.

The scene before me was violent, brutal---yet there was no active brutality to witness. Like a swiftly slicing blade, or sudden slash of lightning . . .

It took a long time for Lily Beth to truly begin to recover. Her son and her mom had been visiting her, even when she was in a coma.

"I've met far too many Helen Burke's in this town, Clare. So-called patrons of the arts who judge with a ridiculously superficial yardstick how poets and painters, writers and artists 'should' speak, act, think, and dress --- just like they do, of course! Well, I gave her a piece of my mind, I can tell you."

"You did?" I bit my cheek to keep from grinning.

"Oh, I stayed civil---even though I dearly wanted to kick that cow in the rump and be done with her. Our party was low-rent' she said. This area 'unsavory.' What a complete moron! Here's a woman who has no understanding of our cultural history, who thinks Greenwich Village was always filled with trendy bistros and expensive boutiques, that he heart of bohemia is found in a chic shoe store and a cupcake shop!"

That odious woman had the nerve to tell me she'd come here expecting a 'classier act', and that given Esther's attachment to our Village Blend, and that's when I educated her."

I informed Her Highness of High Heels that Greenwich Village --- not to mention Soho, Noho, and Tribeca ---may have undergone facelifts in recent years, but for over half a century, they were not 'classy' parts of town. The Village was a place you went because the rent was cheap! It was dangerous and dirty and filled with drunks and drug addicts, but it was also filled with brilliant oddballs: young artists and poets, musicians and painters, comedians and playwrights, none of whom would afford designer sandals, spa memberships, teeth whitening, and nose jobs!"

"Then I set the woman straight. Art isn't about what's pretty. It's about what's true and what's real. Being an artist is about finding your voice and vision---just as Esther described it. And you don't find truth through cosmetic surgery. You find it through authenticity."

Clearly, Madame was ready for a Washington Square soapbox, and I was delighted to see her so fired up, but . . .