Twenty year old Susannah Jones is a second year philosophy student at Sussex University. It's the seventies and there is a lot of love and partying going on which Susannah does her fair share of. She lives with Jason, "a good-looking, mature man of nearly thirty" who works as an antique dealer and takes care of her financial needs but has become increasingly distant emotionally and sexually.

Susannah is an immature, judgemental philosopher who considers herself "clueless" and it shows. In an age where women are supposed to be taking responsibility for their careers and their lives she is incredibly neglectful of the simplest things that have the biggest outcomes -- like taking birth control every day.

She doesn't really get in touch with her sense of self until she gets pregnant during a sexual affair with Rob, a fellow student. Something I wished had happened sooner in the book. If being pregnant isn't difficult enough she doesn't know who the father is (although it's pretty clear to the reader). Making things more difficult is the fact that she is still coping with the death of her father a year earlier, has a dissertation to write and suffers from horrendous nightmares that result in her waking up screaming at the top of her lungs.

A Girl's Guide to Modern European Philosophy is divided into three philosophies the first Friedrich Nietzsche (Human, All Too Human), the second is Martin Heidegger (Being and Time) and it closes with Soren Kierkegaard, (Fear and Trembling). Susannah uses what she learns from each of these philosophers to help her make decisions in her life, or at least start thinking about her life in a mature way.

Charlotte Greig has created an interesting young woman who is disconnected from herself and from the people around her. As the novel progresses it is easy to judge and want to throttle the woman for her self absorption, unreliability, forgetfulness and deceit. But in the end sympathy ensues and dare I say forgiveness.

Many comprehensive topics are touched as we follow Susannah through her story: homosexuality, drugs, pregnancy, abortion, marriage to name a few. I especially appreciated the author not taking the expected and safe route for Susannah. Some times she focused too much on insignificant details, like getting dressed while I would have liked details on Susannah's relationship with her father and his death which had an obvious impact on her but overall it is a good read.

Judge for Yourself - Get the book from Amazon 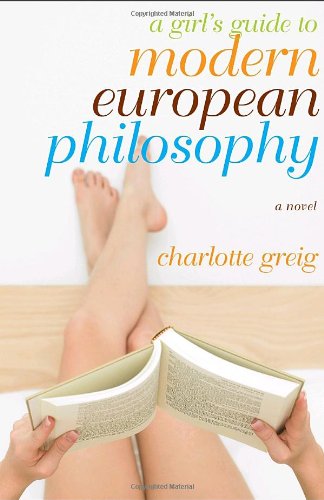 A Girl's Guide to Modern European Philosophy
Charlotte Greig has created an interesting young woman who is disconnected from herself and from the people around her. As the novel progresses it is easy to judge and want to throttle the woman for her self absorption, unreliability, forgetfulness and deceit. But in the end sympathy ensues and dare I say forgiveness.
Buy Now

Rate This Book - Have you read A Girl's Guide... then you probably have a definite opinion on it. Use this poll to tell us what you thought of it.

Thank you for stopping by to read my review of The Girl's Guide. Have you read this book? Share your experience with this book with us.