A History of Korea Review: Short but Surprisingly Relevant

Why do we study history? For some of us, it might just be a desire to engage in an idle accumulation of dates from the past - and history often does get taught this way in school, with memorizing dates and figures from what happened. But for most people, the past if they are interested in it is to study its lessons for the present and the story of how it led to today. Many history books tend to miss this, and they don't make an effort to link what they are talking about to contemporary events and our own concerns: the way history relates to us. Kyung Moon Hwang's work A History of Korea: Second Edition avoids this trap, and writes an engaging historical work which shows why Korean history matters to present day Koreans, why struggles or kingdoms from the 6th and 7th century continue to resonate with Koreans and how they interpret them differently. It makes the work, despite its short length, a much more interesting and revelatory book than most introductory history books, which are sterile and are willing to write about everything to do with their subject, except for why it is important.

The organization of the book is relatively basic, functioning as a chronological structure. Its brief introduction apologizes for the short length and mentions that many things must be omitted, and stresses that the focus of the book is historiography and showing how Korean history relates to the present. After this every chapter tends to begin with a subject which happened during the era and then goes back to the beginning, and goes in chronological order up until the modern day, when it bifurcates into covering South and North Korea alternately.

Kyung's book has three great strengths: it relates the relevance of Korean history to the present, it identifies continuing themes in Korean history, and it shows decisive turning points and key events in Korean history and how they might have been different. Few other introductory history books do the same - most are content to provide a rather dry narrative of history, simply stating dates and events without endeavoring to give any real significance and importance to them. Kyung provides examples of changing historical identification, such as how Sulla's conquest of Korea with Chinese aid has over time been reinterpreted negatively, with an idolization of the idealized independence of Goguryeo (itself an exaggeration) being a more nationalistic and more nativist view of Korean history. Others include the way that North Korea and South Korea have crafted different national memories concerning Korean resistance fighters during the time of the Japanese invasion of Korea in the 1500s, differing perspectives on Korean democratization and economic growth, or how the place of women in Korean society has changed over the millennia. He matches this with a discussion of turning points, such as the aborted modernization and opening of Korea in the late 1700s under King Jeongjo, or how things might have turned out differently during the post-WW2 occupation of Korea and let to different political outcomes in both North and South. The struggle of trying to craft a relationship with China, and the enduring importance of inheritance and heredity in Korean society receive their place too: this is combined with the differing perspectives of Korean history to show that North Korea is far from an aberration, but rather another possibility of what Korea might have looked like, legitimate in its own right as a historical path just as South Korea shows how Korea has developed in the southern half of the peninsula.

This has the great strength in making the book feel like a real history book, one where one shares in the intimate nature of what people's hopes, dreams, and understanding is, rather than just scratching at the surface. There is the sentiment that the historical debates and issues which are discussed are ones which are of real relevance to the Koreans, and that one is discussing actual issues debated by Korean historians. Other books struggle to do this: the most recent general history book which I have read A History of the Czech Lands was terribly uninspired in actually dealing with how Czech history is debated and interpreted, just listing what happened without any commentary. Kyung writes a book which is an introduction, but manages to make it feel like much more.

Of course, being such a short tome naturally tends to lead to some unfortunate omissions and the need to rush through Korean history. At only 200 pages long, there is precious little room to flesh out history, particularly before the 20th century, and there is exceedingly little discussing the cultural and normal life of average Koreans before the modern era. Entire centuries are brushed over, save for a few events, such as the beginning of the second millennia which seems to have very little written about it. If the book was say, an extra hundred pages longer, it could have been better balanced and written more about ancient and medieval history, instead of having to skimp on them and give overwhelming precedence to the present. This also prevents full discussion of some of the cultural products of the past, as while the book gives a good list of important modern Korean novels and cultural productions, it does little for older days. It could also have used some additional photographs and maps, since while there are some, they are relatively few and key concepts might have been well explained with them - such as the distribution of Korean geomancy lines, which supposedly center on Pyongyang.

There is also a weakness linked to the greatest strength of the book, in that it tends to mention a historiographical dispute on a topic, and to say "some disagree with..." or "some propose that..." without ever stating exactly who these people are. It seems that Kyung is indicating that these people to whom he is referring are broad social groups rather than individuals, but it would be good if he better showed who they are, and if they constitute solid ideological factions - do the Korean equivalents of liberals and conservatives, progressives and reactionaries, split in their conception of say, Sulla and its unification of Korea and its usage of Chinese assistance to do so? How do different factions in Korea relate to their past? Kyung relates the past to Korea as a whole, but as the history of the United States in the year 2020 has shown, the past rarely has a unitary narrative which has been settled on: different political factions have different conceptions of history.

Kyung accomplished an impressive work in crafting a book which is approchable, short, well-rounded, and which is refreshing in both demonstrating the importance of Korean history and giving outsiders a perspective on what its controversies are. It lacks the soulless and artificial feeling which all too many introductory history books have, which give boundless facts and a listing of dates but which lack any real depth and give no sense of the importance of the history which they are discussing. Instead, it reads easily and serves as an excellent introduction into Korean history, showing some of Korean culture's sustained features, its struggles, and how it relates to the present.

4 stars for A History of Korea 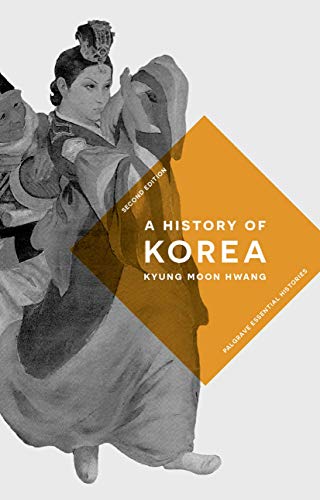