A Night Below the Perfect Kiva in Utah's Grand Gulch

Descent into an Ancient Kiva

A Night Below the Perfect Kiva*

After three days and nights of exploring Grand Gulch (a canyon in southeastern Utah and the site of numerous Anasazi ruins), we had to descend lower into the Grand Gulch before we could proceed up into Bullet Canyon, our exit canyon that would lead us back up into the world of the rim. At the lowest point it seemed even hotter, but why were the willows getting so thick down here we wondered. We rested frequently in any shady grove we could find and praised the Great Spirit when we at last arrived at the mouth of Bullet Canyon, a tributary of Kane Gulch. We came across some campers who warned us that water was extremely scarce here, but we might find a few springs at the Perfect Kiva Ruins.

Our trail rose rapidly and with each foot gained in elevation, we enjoyed what we thought was cooler air. The higher we trudged with 45 pound packs, the easier it seemed. Passing under Jail House Ruins (with jail-like wooden bars in the windows), we knew we had but a half mile to go to set up our fourth and last campsite of this trip through time.

We selected a high ledge of slickrock a few hundred yards from the Perfect Kiva. My son Rich and I chose a sandy spot within the slickrock to pitch our tent. Others did the same in the waning hours of the day.Having to break camp early the next day, some of us grabbed our flashlights for a nighttime exploration of this last of the Anasazi sites containing a perfectly preserved kiva. Stumbling along the dark and dusty trail with my flashlight, I recalled nighttime climbers scampering up the sacred slopes of Mount Fuji in hopes of greeting the rising sun.

Just a few pinyon jays studded the nightscapes below us in a much more arid and stark landscape than the previous sites. When the last of our group arrived up at the level terrace housing the Perfect Kiva Ruins, we individually explored these dark dwellings, shined lights on eery petroglyphs, and eventually each of us descended the ladder into the kiva.

The world of the kiva is a world of its own. My descent into this Earth's womb at nighttime on an upper ledge above Bullet Canyon brought me back to pre-Columbian times--perhaps even to mythological times. All history is mythology wrote Henry Thoreau. If one goes back far enough in time, human history blurs with mythological traditions. Contemporary Southwestern tribal people believe that humans emerged from a lower spirit world in ancient times. All spirits pass through a small entrance to and from that spirit world called a sipapu.

Modern day kivas still possess sipapus stemming back to Anasazi times. For a moment or two in the darkness of this womb I imagined a stream of souls coming and going to and from this earthly life. The womb seemed like a clearance house, and anyone alive in bodily flesh would have to be reminded of the transience of human existence. Do I have enough corn to eat? Are my springs plentiful? Will it rain? All these questions are put into perspective in a kiva.

Many have conjectured about the activities in a pre-Columbian kiva. One Native American ranger at Mesa Verde National Park suggested to us years ago that a priest or shaman may have danced by firelight upon a wooden foot drum, and he may have chanted to his congregation the story of human emergence from the lower depths. He may have preached the necessity of maintaining harmony through prayer and ceremony.

Without prayer there would be no rain. Without concern for the entire village, one person may reap undo benefits from nature. Heya, hey, hey! I almost heard the shaman sing. Time to climb out and let others experience the world of the kiva.

Amazing to see the luminescent sandstone glowing in starlight far below. Where was I? Still on this Earth? As others emerged from the kiva's depths, we gradually regrouped and sat in silence staring into space. Each of us in his own way had been very far away, and each of us had to come back. One person in our hiking/camping group (fifteen in all) thought he might have seen the pinyon pines inching along the sandstone floor; he wasn't back from the other world yet.

After carefully picking our way downslope and getting water from a lower spring, we were ready for sleep in the comfort of our tents. But not yet. Just as we unrolled our sleeping bags, a strange light appeared on the rimrock far above. Were e still in the kiva? What on earth was going on? Then a big arc of light rose over the canyon rim right next to the strange bright light. What we saw was the rising of the moon and Jupiter, father of the planets.

The moon gradually illuminated a semi-circular sandstone cliff across from our camp as though some grand theatre would soon take place. Moonlight emphasized each crack in the cliff making it look like spirit rock. The Perfect Kiva attuned each of us to the nature beyond nature, and we were thankful. We slept soundly that night somewhere between here and there.

*This is a modified excerpt from my out-of-print book Where Land is Mostly Sky (1997). This section of the book was anthologized in the book Stories and Stone, ed. Reuben Ellis. Tucson: University of Arizona Press, 2004.

Have you ever camped in the desert? 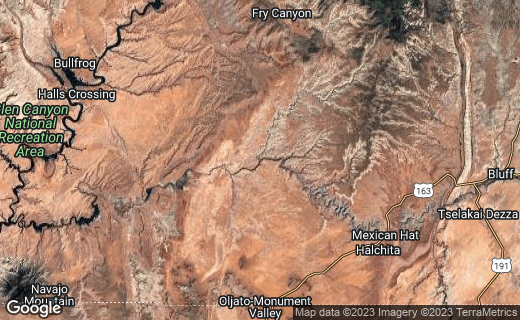