A Review of "We Get Nothing from Fishing: Fishing for Boat Opportunities among Senegalese Fisher Migrants"

Transforming a Wave of Migrants into Individuals?

Migration flaws into Europe, and into America, have expanded over the past several deacdes. Sources of population ranging from Asia, to Africa, to Latin America have brought millions of newcomers into the rich developed nations. There, political, social, and cultural effects have been significant. The political reaction is the most obvious, with the rise of parties contesting the migration issue, helping to destabilize the European Union, and assisting in the rise of the American President Donald Trump. But despite this, the idea of who and from where these refugees come, and why, is one which is almost comically simple to European and American eyes - poverty, and to escape wars. In response to this, Henrietta Mambo Nyamnjoh's book "We Get Nothing from Fishing: Fishing for Boat Opportunities among Senegalese Fisher Migrants" is a tremendously useful resource for showing why and how Senegalese migrants travel to Europe. What emerges is a story much more complex than one of simple poverty and deprivation, although it is of course closely intertwined, but instead one which takes into account hope, culture, networks, successes, failures, and necessity. The ways in which migrants travel and the mechanisms driving it, and the gritty realities of such a voyage emerge from obscurity to center stage. And it is one which puts a much more human face upon the Senegalese people, and gives windows into their society, in a humanizing and heartfelt book which is still of great scholarly use.

Chapter 1 is devoted to the social underpinnings of emigration, such as social capital, views upon it, and the example of Sall, who had gone to Spain. It deals with the areas studied, such as Saint Louis,and the methodology as well. Chapter 2 then proceeds to discuss structures in migration, such as the composition of the boats and their crews which send the migrants into Spain, and the profitability associated. Once more it uses substantial numbers of personal contacts and experiences with individual migrants. It combines this with discussion of hopes and expectations in Europe, demographics of migrants, internal policing, and political-social commentary (such as the feeling of injustice that government leaders go to Europe commonly yet the poor are unable to do so). Chapter 3 deals with some of the historical views on fishing and its development, utilizing again one of the great strengths of the book - a good usage of primary sources with quotes and discussion from fishermen about their own situation and views, helping to do much to understand the mentalité which drives them. It also dealt with the economics of fishing itself - not good, in a time when the fishing industry seems to be in a state of crisis. It also discusses the religious relationship to fishing and migration, and the social impacts upon families onshore. Chapter 4, "The Economy of Boat Migration" deals with understanding the economic benefits of boat migration, social impacts (and social constraints, such as fathers keeping their male heirs home instead of letting them emigrate), providing case studies of succesful demonstrations, and the impact on consumer culture of the migrants. But it also tells of the tragic stories of emigrants who die en route or are deported from Europe. It is a haunting and saddening chapter in its concluding remarks.

Chapter 5, "Perceptions of Europe and ideologies about immigration" deals with the image in Senegal about Europe, a frankly unrealistic one - one in which Europe is a paradise, where everyone will find their fortune. Those who go to Europe are still very much impacted from the experience, at the least learning valuable skills (particularly a new language) and having a new philosophy of time. For some too, while Europe provides a way to provide for family and communal obligations, it also means a liberation from social ties which hold them down. The pressure to migrate is such that those who do not desire to do so are more of a sub-culture, which the book explores. Chapter 6, "Navigating and harnessing networks in the migration process", deals with the role of individuals in a process which is far more than just the efforts of individuals, ranging from parents who are vital for saving, particularly mothers who are vital in the entire decision. Large collective families also pitch in, and provide valuable contacts in Europe and throughout the chain of people. Successful migrants help new migrants along the way both as contacts but also and even more importantly as conveyers who assist in the movement of immigrants along the journey and help in recruiting them. Chapter 7, "Governance and fishing policies", which provides an overview of the Senegalese fishing situation and its challenges (such as pollution), the view on the part of the Senegalese fishermen of the lack of action taken by the government (with some occasional exceptions), competition with foreign fishers and with industrial fishers, and national planning (or lack of it, in stark contrast to agriculture) upon fisheries. It also deals with European policies which attempt to keep migrants out. These have often failed in the face of migrant determination and willingness to flexibly change their approaches to continue to arrive in Europe. A brief discussion of NGOs and individual views of Spanish policies (which were initially extremely lenient) was also presented. Chapter 8 is a conclusion, discussing migration in context as a sum of hopes, networks, expectations, policies, and cultural realities, and linking it to religious guidance which has a strong connection to migration. It ends with a recommendation for future research in Spain and Mauritania.

There is much praise that I would give to this book, but I think that the greatest benefit and strength of it is in regards to its humanization of the Senegalese migrants and people. The extensive usage of interviews meant that their voice shines through constantly, and the author backs that up well with description and sets the tone superbly. One feels very much the atmosphere of the situation and has a feeling of connection to the people who are mentioned in the volume : it is no dry tone, but rather one filled with the voices of people, in a host of different scenarios ranging from the successful returnees from abroad, wives sad about their husbands who have left, fathers who either voice chagrin over their sons having left to go to Europe or happiness over their success, the shame and disappointment of those who failed, those who stand against the entire structure in a counter-culture, and a host of others, with voices from seemingly every perspective connected to the issue. This includes both the author's translation, but also transcripts of the interviews which she had done, which for those who want to further expand their complete understanding of the issue would be quite welcome. These mix together brilliantly to form a conclusive and well constructed narrative about the factors behind migration and how they are structured, one which is well supported by examples and information upon related issues such as fishing economic situations. So too, it has a complete, convincing, and fascinating argument that migration constitutes as much as a rite-of-passage and a time-honored custom, something which is easy to miss and which does much to inform our understanding of the migrant situation. There is a good mixture of detail and prose, which makes the book easy to read and yet still conveying much information. It isn't often that a scholarly work manages such an emotional combination, but Nyamnjoh has managed it.

I have very few critiques, by contrast, which I can extend to the book. I suppose that there was relatively little information concerning the total amount of refugees and migrants who had traversed from Senegal to Europe, but on the other hand I imagine that this information would be quite difficult to ascertain or estimate. On another issue the author's chapters sometimes felt as if they were covering information which had already been previously discussed and were hence somewhat repetive. But they did maintain enough of a difference each time to prevent such a conclusion from forming itself too solidly. Some additional commentary upon the effect on Senegalese society, beyond just the fishermen themselves, might have been welcome, although the author did note some of the political effects.

Overall, this is a thoroughly splendid book. There are many people who would find it to be of great utility. Those interested in contemporary Senegalese culture and society will be emotional and form great connections to the people portrayed in the book, for the author's pen has done much to bring them alive and to make them feel human. If the need for knowledge by contrast is focused upon fisheries, this book is well equipped in its analysis of fishing policies and the lives of fisherpeople in Senegal. Its principal focus, migration, will be one which is extremely useful to those interested in the contemporary European migrant crisis, as it shows many of the drivers and factors which are influencing the movement of refugees from Africa and the Middle East to Europe, beyond the normal cliches of poverty or war. It even provides some history of Senegal with cities like Saint Louis. Resultantly, it is an excellent book for a wide range of people upon a wide range of issues, which is well integrated while still commanding an excellent degree of depth, easily readable, well backed up by information, and with a great collection of photographs. Overall a splendid book and one which few others come close to matching, particularly on this issue.

5 stars for We Get Nothing from Fishing 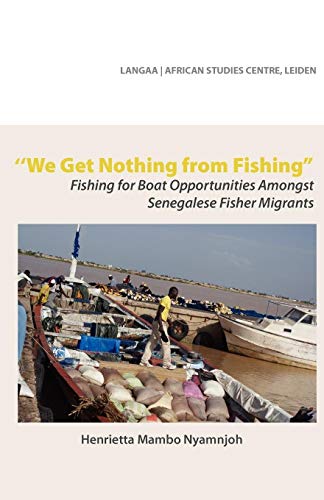 We Get Nothing from Fishing. Fishing for Boat Opportunities Amongst Senegalese Fisher Migrants (Langaa & African Studies Centre)
Buy Now