Affirming Life: A Review of The Daily Zoo and Year 2 by Chris Ayers

The author loves writing about new things that others may find enjoyable.

He’d been diagnosed years earlier with an alphabet-soup of medical conditions that revealed only one comprehensible and frightening term: leukemia. He obviously survived. But I’ll leave you to read the introduction of his books to share in his journey through the nightmare of worry and treatment.

As a character designer in the entertainment industry, he responded to his ordeal by drawing one character a day. That effort not only affirmed his life but led to several books, starting with The Daily Zoo and Daily Zoo Year 2. Each book documents a full year of drawings. The hardback versions of the books are about 8.25 inches square with 160 pages. Paperback versions are also available.

You can find out more about the life of Chris through a video that I've linked at the end of this article.

His disease wasn’t the reason why I bought these books. 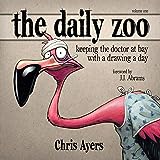 The Daily Zoo: Keeping the Doctor at Bay with a Drawing a Day
Buy Now

Not all the illustrations are in color, since some days he could barely lift a pencil to draw. But they all delight with their bemused expressions and human-like responses to all kinds of situations. Most are caricatures of animals, though here and there are concoctions, like the day 100 Yodaphant, an alien combination of Yoda and elephant.

All pictures feature text describing the technique or inspiration behind his creation. For the Daily Zoo, the Polychromatic Hippo on day 114, begins “For this one, I was inspired both by tribal markings of certain aboriginal cultures and by the practice of painting elephants for festivals in parts of India.”

The last few pages of each book summarize the entire year’s calendar. A miniature of each drawing occupies one day, and each month is laid out on two facing pages. Not quite half of the artwork that appears on these final pages do not appear in the rest of the book. It’s a nice bonus to be able to hunt for these new creations. I only wish they were bigger.

I didn’t buy anything from the author that day, though his offering included a new coloring book, cards and t-shirts displaying some of this characters. Yet he was kind enough to autograph the two books of his that I’d brought, while proclaiming that he’d been in remission from the disease for years.

Chris has created additional volumes in this series. They're worth buying if you become a fan of his art.