Afterlives of the Rich and Famous Book Review

Sylvia Browne was a renowned psychic and medium who has written many books on the subject, also appearing on the Montel Williams Show, along with hosting radio shows and giving personal readings to people. This book, as ridiculous as it sounds, gives us an insight into the afterlives of some of the most famous people who have graced planet earth with their presence. There are over 40 celebrities in this book who have passed on to the Other Side, and great detail is given into what they are doing now.

The introduction really tells us why Sylvia wrote the book, with the help of her spirit guide, Francine. In the next chapter, Death...and then what? tells the reader what will happen when one dies, and what to expect on the Other Side when we finally go home. Apparently, when we die, we walk through a tunnel to our afterlives. You will then be greeted by all any pets you have had in your life and any loved ones who have since passed on. There is also The Hall of Wisdom and Hall of Justice. Sylvia also discusses what goes on on the Other Side and the sort of buildings you will find there. Yes, really!

The next chapter, Glossary, tells you about the terms and words Sylvia and Francine uses. For example, the astral tunnel is the way of visiting loved ones or the Other Side, and transporting from place to place. Sylvia refers to the Other Side as 'home.' Another example is 'cocooning.' This takes place in the Hall of Wisdom. Spirits who are unable to make a peaceful transition go to the cocooning chambers to receive extensive care. This could happen if someone dies suddenly or if they feel they are, or were not, ready for death. Also, one of other the important parts is the Scanning Room. Once we have crossed over to the Other Side and greeted by our friends and family who have since passed on, we go to the Scanning Room. Our spirit guide will take us here, located in the Hall of Wisdom, for us to look back on every part of our lives.

The main chapter of the book is, of course, the celebrities who have passed on. There are 43 rich and famous people who have crossed over and are now living happy and fruitful lives on the Other Side, believe it or not. Sylvia gives biographical information on each celebrity. Some of them gets just a couple of pages and others, like Elvis Presley for instance, gets a few pages. Then there is another section 'from Francine' where she discusses what the celebrity are doing now they are 'home.' Francine obviously channels this information through Sylvia.

For example, when President Abraham Lincoln was assassinated he arrived 'home' distressed and disorientated. This is normal, from what I gather, with those whose lives have ended abruptly. He was greeted by lots of people, including his parents. He spent 10 years (in our years) in the cocooning chambers. Apparently, he spends a lot of time in the Hall of Records where he likes to expand on world history and politics. He lives alone and regularly attends Church. And both he and his four sons like to attend baseball where Jo DiMaggio plays. As ridiculous as it sounds, this is what Francine says he is doing.

Just as another example of someone who has died, is Patrick Swayzee. He was a much loved actor, singer and dancer. When he sadly lost his battle with cancer, I remember feeling sad at the loss of such a wonderful man. So when I saw his picture on the front of this book, I was curious. According to Francine, he began preparing for his trip 'home' and had been visiting and receiving visits from the spirit world long before he died. When he finally arrived home, he was greeted by herds of horses and dogs greeted him, which was led by an Arabian black stallion. Apparently, after being touched by what he saw in the scanning room, he had a relapse which, according to Francine, is rare. He is currently being cocooned to help him through this. And when he comes out of cocooning he will join his father on a ranch.

Now, I'm not going to get into whether there is an afterlife or not. No doubt we do go somewhere when we die, I don't know. But this, personally, I found utterly remarkable and amazing to think that people can go to some other plain and live their lives as peacefully and luxuriously as they wish. Yes, it would be nice to know that our loves, and pets, are somewhere out there looking down on us and looking after us. But the idea of them going in a scanning room and there are big halls and buildings I find unbelievable. The book is amusing, I'll say that. Read it with an open mind.

Afterlives of the Rich and Famous by Sylvia Browne 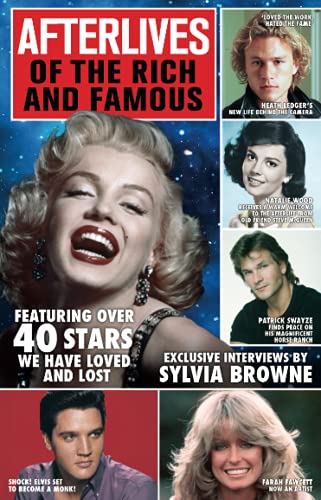 Afterlives of the Rich and Famous
Buy Now