2005 Medal of Honor for Literature from the U.S. National Arts Club

2010 Knight of the Order of Arts and Letters

The Nobel Prize committee has chosen Canadian Anne Munro as winner of its ultimate prize of literature because they have found her to be the "master of the contemporary short story" and for her lifetime body of collection of short stories. It is wonderful that solely a short story writer has won the Noble Prize in Literature.

Most of her stories are about Canada and are set in her native southwestern Ontario. Her stories also explore human complexities and look into the deep emotions and feelings of her characters.

Her short stories have been described by critics as similar to reading a novel because of the depths and truths they illustrate. Critic Alex Keegan has said, "In most Munro stories there is as much as in many novels."

She has been described as Canada's "Chekhov" because her short stories are like his because the plot is secondary and little happens.

What becomes so important in Munro's short stories is the moment of epiphany which is discovered by her characters in concise, subtle, revealing detail. Her stories deal with love and work and the failings of both.

She shares Chekhov's obsession with time, and her characters' inability to delay or prevent its relentless passage and movement forward. Her earlier short stories have a common theme of the dilemmas of a girl coming of age and coming to terms with her family and the small provincial town where she grew up.

In Munro's later stories, Hateship, Friendship, Courtship, Loveship, Marriage (2001) and Runaway (2004), her focus changes to the problems of middle age, of a woman alone and of the elderly. In these stories she reveals the ambiguities of life with a look at the "ironic and serious" at the same time.

In her particular style of writing her characters always experience some sort of revelation that sheds light on their situation and gives meaning to that situation. She holds a magnifying glass to the parts of life that are in bad taste, that are heartless, and that also are joyful.

Critic Robert Thacker has said she writes "of just being a human being." She places the fantastic next to the ordinary, with each undercutting the other, and without effort evoke life.

Alice Munro was born in Ontario, Canada to Robert and Anne Laidlaw. Her father was a fox and mink farmer and her mother was a school teacher. She grew up on the farm and this has always been her preference for living.

She began writing as a teenager and published her first story, "The Dimensions of a Shadow," in 1950 while studying English at the University of Western Ontario. During her university years she worked as a waitress, a tobacco picker and a library clerk to raise money for her tuition.

She left the university in 1951 to marry James Munroe and the couple moved to Victoria in 1963. While living there they opened "Munro's Books", a bookstore which is still open and operating today. The couple had three daughters.

Munroe published her first collection of short stories in 1968 with "Dance of the Happy Shades (1968) and won the Govenor General's Award, Canada's highest literary prize. She went on to publish "Lives of Girls and Women" (1971) a collection of interlinked stories.

Alice and James divorced in 1972 and she returned to Ontario to become Writer-in-Residence at the University of Western Ontario. She married Gerald Fremlin in 1976 and moved to a farm outside of Clinton, Ontario and later to a house in Clinton where Fremlin died in April 2013.

She won her second Govenor General's Award for her next collection of interlinked stories, "Who Do You Think You Are? (1978).

In the 1980's and 90's, she published a collection of short stories about once every four years. Her stories have appeared in such illustrious publications as, The New Yorker, The Atlantic Monthly, Grand Street, Mademoiselle, and The Paris Review.

Her short story, "The Bear Came Over the Mountain," was adapted to film and directed by Sarah Polley under the name, Away from Her. It premiered at the 2006 Toronto International Film Festival and it was then nominated for an Academy Award for Best Adapted Screenplay only for the award, sadly, to be given to No Country for Old Men.

Away from Her, brings to film Monro's sad, poignant love story of a woman with alzheimers passing in and out of the past and present, and falling in love with a man at the nursing home as her husband of 45 years sadly and heartbrokenly watches. Munro's play with time is shattered as the husband tries desperately to shake his wife back to present reality and to prevent himself from loosing her and her love.

Munro announced in October 2009 that she had received treatment for cancer and a heart condition and later had bypass surgery, and at this time said she was retiring from writing. Fortunately retirement did not last long and she picked up her pen to write again, saying, "I had thought of something more to write."

Dance of the Happy Shades 1968

Something I've Been Meaning to Tell You 1974

The View from Castle Rock 2006 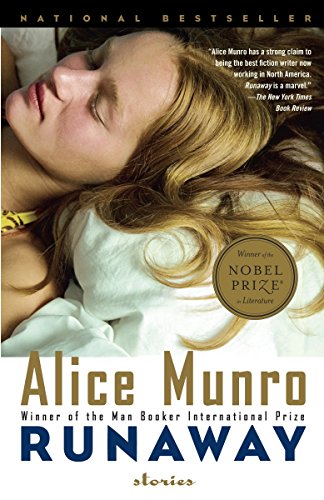 The majority of Munroe's short stories are set in Huron County, Ontario and this strong regional focus is one of the main features of her fiction. She also writes in the omniscient narrator point of view which serves to make sense of the world of small-town settings and with the complexity of her female characters. Her work is an example of the literary genre known as Southwestern Ontario Gothic.

Munro has the uncanny ability to write what the reader is thinking. The reader is drawn into and see's someone else's visions as their own. This is one of the pleasures of reading a Munro short story. She brings forth an empathy so perfect that it is nearly undetectable. Munro is a writer of fearlessness and at times fearsome ambition.

In her short story collection, To Much Happiness (2009), her ten short stories take on sensational subjects. All the elements of pulp fiction are present in these stories: violence, adultery, extreme cruelty, duplicity, theft, suicide and murder.

Refusal is an important theme in her fiction as her characters refuse to obey convention and rebel against authority. We are shocked by the pulp fiction stark stories and characters. We come to realize that it is the shock of recognition. We have had similar notions or we are that way also.

She has a brilliant, unique play on the contemporary short story and plays with time weaving it in and out of the story. Munro has said she also reads stories unconventionally. "I don't always or even usually read stories from beginning to end . . . I start anywhere and proceed in either direction."

She doesn't read a story to find out what will happen but to immerse herself into and to experience the world of the story and to inhabit it for a while. It alters her perspective which she likes to do and gives her an unusual way to write her own stories.

In her short story collection, "Hateship, Friendship, Courtship, Loveship, Marriage (2001), the women in her stories are constantly torn between domesticity and independence, between familial roots and freedom, from a yearning sense for connection and a more solitary sense of themselves as outsiders. Munro traces the choices her women characters make and the fallout of those decisions. She uses an old fashioned realism in her writing and the mundane of ordinary life.

Her characters are real, flawed and sympathetic because they are people we know firsthand or shockingly, ourselves. Munro shows us how her characters are shaped by love, loss and the simple passage of time.

Her women are characters who have grown up in small provincial Canadian towns and who where faced at some point in their lives with a decision in the choice of staying in their present life or leaving for a new life in a larger town or city.

Her female characters have grown up with a traditional set of values, mores and dreams, only to find the 1960's and its hectic times has altered their expectations. She takes a look at the ramifications of one character who has stayed still and another character who has moved on.

Munro's stories are more ambivalent and a reminder of the foolishness of impulsive, youthful choices and memories which form an impediment to self-realization. Her characters have "a little hum of hate running along side the character's love" for another. She gives the reader the sense of a character's entire life as she moves back and forth from the past to the present.

"The View from Castle Rock" (2006) is her collection of short stories that does not take place in Canada. These stories take place in 17th century Scotland where she looks at her family's history and produces a mixture of invention and fact. She focuses on life's sorrows and tragedies as she reveals the stories of her family which are part truth and part fiction.

Alice Munro and her short stories are a revelation of imaginative characters that learn shocking truths about their lives and the decisions they encountered along the way in life. And, we learn shocking truths about our own lives, as well, as we read her short stories. We learn the ramifications of our decisions along with her characters as they discover them too.

The "master of the contemporary short story" has finally won the ultimate prize. Congratulations Alice Munro on becoming a Nobel Laureate.