Moving to Mexico I - Holbox

It all started on Isla Holbox

On a rainy night in early February of 2011, I found myself in an ancient golf cart bouncing along a muddy trail towards a destination unknown. Our hard, grim-faced driver didn’t speak as he navigated in what to me was complete blackness. It was raining hard and the wind whipped the cold water into every possible opening, penetrating jackets, necklines, and socks. Our bodies were soaked and our spirits crushed by the unexpected deluge. After what felt like an eternity, and long after the point when we realized that shielding ourselves from the driving wind and rain was an exercise in futility, we pulled up to our lodging. The driver quickly shuffled us and our bags off and went back into the void to retrieve the other half of our group who were waiting at the docks.

If you're happy and you know it, FLY!!

Just what the doctor ordered

My mismatched band of international nomads and I arrived on Holbox, a small island off of Mexico’s Yucatan peninsula, by ferry an hour before and waited patiently for a golf cart taxi. This was my first time in Mexico, a fairly sudden vacation choice to get my mind off of a recent breakup. My spirits and those of our group were revived by the appearance of the hot Mexican sun the following day and we enjoyed the rest of a week lounging, sharing stories, drinking tequila and debating, in that order.

Our Final Hoo-rah together

There were nine of us all together. The story of how we all ended up there is a tangled mess in itself and shouldn’t be addressed now. Suffice to say there were four women and five men, the nationalities included a Portuguese, four Mexicans, an Argentinean, two Spaniards and yours truly, the Americana. The husband and wife that rented us the space in the adjoining room were hospitable and generous, often staying up late with us and tolerating our abuse. The host played his Spanish guitar for us, he was very talented. I had my moment in the sun when I picked up the acoustic and perfectly picked out “Wish you were here” for roughly 45 seconds before I forgot where I was supposed to be going. The local tequila is strong and plentiful: make a note.

When in Mexico, drink from Cahuamas and eat local

We worked with the owner of the place to hire locals to get us the best of the fresh stuff. We trekked across the island on the first day to meet the fishermen coming in from the day’s work, hoping to buy the best of the catch. When there was nothing available, we knew the storm from the night before had been particularly bad. The local market held us over and we hired the fishermen to take us island-hopping. The nights were full and flickering from the always burning fire, endless cahuamas (like quarts of beer), and the steady drum of someone’s music coming through the community boombox.

Throwing it all way, in order to gain the world

It is difficult to say whether my next decision was made during that first week on Holbox or afterwards when we returned to Tulum. Regardless, I had decided to stick around for a little longer. I cancelled my return flight by failing to go to the airport by departure time, got drunk at a local shisha bar, and staggered back to my room just in time to avoid the jarring morning sun. When I woke up, I lay there for a long time…considering my options for the first time. I would have to find a job…. 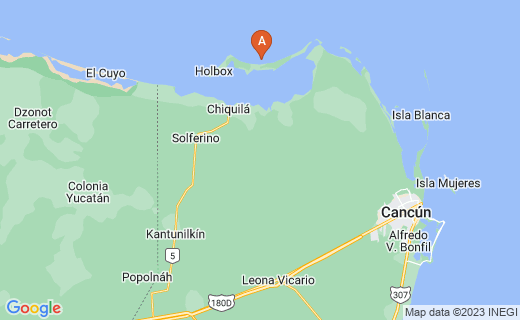 Famous for the season of the tiburon ballena, or whale shark.