An Irregular Wor(l)d: A Funny Bone is Humerus Part Two

John values the use of humour and enjoys writing and reading limericks and jokes. He is a fan of Dr. Seuss, Edward Lear and Shel Silverstein

A Funny Bone is Humerus

A couple of years back I wrote a short poem called "A Funny Bone is Humerus." It was all a play on words and compared the strange ways we use and attach words to things in the English language.

Because this poem goes along a similar path I think it appropriate that I add a tag and refer to "An Irregular Wor(l)d" as "A Funny Bone is Humerus Part Two."

I hope you find it even funnier than the original. That's assuming you even read the first one .. or even found it funny.

Why are boxing rings not round? I ponder,

And confused fighters told "Move to the corner!"

My closest relative's my father,

But a long way distant is known as farther.

Why do fish hang around in schools?

Who teaches them the golden rules?

And what about a herd of cattle,

Does this mean you can hear them rattle?

Does that mean a smurf is not the star?

If parks are places that you play,

Do cars have fun when we're away?

One fish is fish, and more are too,

One sheep is sheep, and so are ewe.

One mouse is mouse, and two are mice,

So why is not two houses, hice?

One male is man, and two are men,

So if one person is a human,

It means that two should be humen.

If we strike gold or oil, we're rich,

But a strike in baseball is a bitch.

Travelling on a plane's a trip,

So is falling over and breaking your hip.

The World Wide Web has many sites,

And a unit of measure is called a bite.

The world called Earth has many sights,

And bugs, and nasty things that bight.

This poem is full of many puns,

I know bad jokes are not the trend,

So, I'll bring this one to an end. 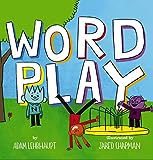