Analysis on All Quiet on the Western Front

Ojas has a wide interest in many fields. For the most part, he finds himself learning about new technologies and attending nearby hackathons

The novel All Quiet on the Western Front by Erich Maria Remarque, tells the story of Paul Bäumer, Kemmerich, Müller, and their comrades as they fight for Germany against the French in World War I. Over 65 million men from countries like Germany, France, Austria-Hungary, Great Britain and Italy were mobilized during World War I. Young recruits, some as young as seventeen volunteered themselves into the war due to misleading propaganda. These soldiers are referred to as the “lost generation” not only because they died but because of the mental impacts war had on them. In All Quiet on the Western Front, Remarque employs situational irony to convey the pernicious impact on the soldiers’ mental health, suggesting that the soldiers will be merciless and apathetic, making it impossible for them to reintegrate into society once the war has come to an end.

These soldiers are referred to as the “lost generation” not only because they died but because of the mental impacts war had on them.

The use of situational irony starts to uncover the idea that death is irrelevant to soldiers, making them half-hearted, causing society to leave them out. Readers experience the brutality of war in the novel swiftly. Kemmerich who got shot in the thigh, gets his leg amputated. As Müller and Paul collect Kemmerich’s belongings they could not keep their eyes away from his boots, “Müller is delighted at the sight of them. He matches their soles against his own clumsy boots” (Remarque 16). Remarque’s decision to utilize the word “delighted” is significant because one would not expect someone to be “delighted” near the sight of a dying soldier. Furthermore, “delighted” evokes a pleased or glad feeling versus, a word like surprised which presents a subtle interest rather than an elongated sense of notice, this is odd and ironic considering Kemmerich is a long time friend of Müller and is dying right in front of him. Even more, Müller’s inability to focus and mourn his dying friend illustrates a lack of emotion and self-centered conduct. If the war were to come to an end, it would be hard for Müller to feel a part of society as he would not have the correct mindset to help others in society, sooner or later, making it such that society will disregard him. The phrase “matches [Kemmerich’s boots’] against [Müller’s] clumsy boots” indicates a pragmatic behavior, this is ironic and unexpected since one would expect when faced with the death of a close friend to be empathetic and supportive, not egocentric. In addition, the irony is where Müller actually envies Kemmerich even though he has a leg amputated and is dying. Müller calls his boots “clumsy” even though it has gotten him fairly far into the war. There is also a hint of situational irony when calling his boots “clumsy” even though it was probably Kemmerich who was “clumsy” at the battle and got himself shot. This discrepancy signals the deep and irreversible effect war has on soldiers. This senseless, apathetic behavior displayed by Müller will make it hard for him to rejoin society where it is expected of someone to be emotional or at least sympathetic towards others.

In order to indicate the magnitude by which the soldiers have been disconnected by the war and to describe the mental impacts which make them disoriented, Remarque craftily weaves situational irony into his underlying story. About halfway through the novel, Paul was lucky to receive a leave to visit home for a few days. After the initial rush of excitement had subdued, Paul confesses his feelings to himself, “you are at home, you are at home. But a sense of strangeness will not leave [Paul], [he] cannot feel at home amongst these strange things” (160). The repeating segment stating “I am at home” suggests a lack of understanding or mental confusion of the word “home”. This is mainly because Paul tries to tell himself that he should find comfort here, however, his mind thinks otherwise and refuses to listen. In addition, the tone of the phrase suggests that Paul is feeling perplexed, this is ironic since it would be expected for a soldier returning home to say the same phrase but with an exclamation mark. The word “home” delivers a sense of comfort and warmth which is immediately countered by the word “strange”. The obvious irony is where Paul is bitter about returning home when one would have expected a soldier leaving war to be delighted. By using “home” and “strange” in the same sentence Remarque reveals Paul’s mixed feelings through the irony of using opposing words. Using a combination of such words is ironic since one would have expected “home” to be paired with a word like familiar not “strange”. It can be inferred that Paul has started to feel so much at “home” at the trenches that coming back to his real home makes him feel uncomfortable. He has gotten so used to death, bloodshed, and the stress of war that coming back home makes him feel as though it is a foreign place. Furthermore, this sense of strangeness and confusion can be alluding to signs of post-traumatic stress disorder. Paul is simply unable to comprehend a world without war. It is even more ironic that Remarque utilizes the word “things" which has a feeling of unimportance and vagueness compared to the word possessions or belongings. Even though Paul has spent around seventeen years of his life at home and only about two years at war he finds his belongings to be just “things”. Paul no longer values items but instead values the simpler things in life which are hard to come by in war. These confused and clashed feelings will make it difficult for Paul to find a place in society again once the war comes to an end. He will not be able to fit in or understand his role in a world without war.

He has gotten so used to death, bloodshed, and the stress of war that coming back home makes him feel as though it is a foreign place

To summarize, through the use of situational irony, Remarque conveys the internal damage war has on the soldiers eventually, excluding them from society. It is the duty of the people to aid the heroes who in turn, protect the people’s land. The duty of the people is to make sure soldiers can live a civilian life after returning from war. It is clear that war not only damages land, economies, and relationships but also the people, especially the soldiers. Learning from past mistakes is crucial to human survival in a time where countries are building powerful weapons and war could start at any moment. This makes it more important than ever to make sure the world does not end up with another lost generation.

Did you enjoy All Quiet on the Western Front?

4.5 out of 5 stars from 2 ratings of All Quiet on the Western Front 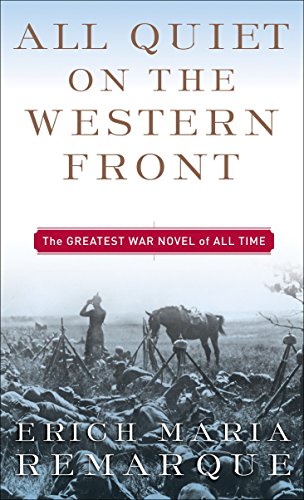 All Quiet on the Western Front: A Novel
Buy Now