I was given a free copy of Armada by Ernest Cline by Blogging for Book in exchange only for an honest unbiased review of the book.

But hey, there’s nothing wrong with a little escapism, right? After all, Zack tells himself, he knows the difference between fantasy and reality. He knows that here in the real world, aimless teenage gamers with anger issues don’t get chosen to save the universe. And then he sees the flying saucer.

No, Zack hasn’t lost his mind. As impossible as it seems, what he’s seeing is all too real. And his skills—as well as those of millions of gamers across the world—are going to be needed to save the earth from what’s about to befall it.

It’s Zack’s chance, at last, to play the hero. But even through the terror and exhilaration, he can’t help thinking back to all those science-fiction stories he grew up with, and wondering: Doesn’t something about this scenario seem a little…familiar?

At once gleefully embracing and brilliantly subverting science-fiction conventions as only Ernest Cline could, Armada is a rollicking, surprising thriller, a classic coming of age adventure, and an alien invasion tale like nothing you’ve ever read before—one whose every page is infused with the pop-culture savvy that has helped make Ready Player One a phenomenon.

Ernest Cline was born in a backwater Midwestern town, with one library, no arcade,and MTV; he was named after the Muppet Ernie. When Enrest Cline was one year old he was pulled from his mother's arms by a tornado that had hit their trailer park. He was found alive and well three hundred yards sitting on a pile of lumber and scrap without his left sock.

As an adult Ernest Cline is known to be a full-time geek when he is not being a novelist, screenwriter, and of course a father. His very first novel titled Ready Player One, was a New York Times and a USA Today bestseller. It appeared on “best of the year” lists, and is going to be adapted into a movie by Warner Bros. and director Steven Spielberg. Ernie Cline now lives in Austin, Texas, with his family, a time-traveling DeLorean, and a large collection of classic video games. 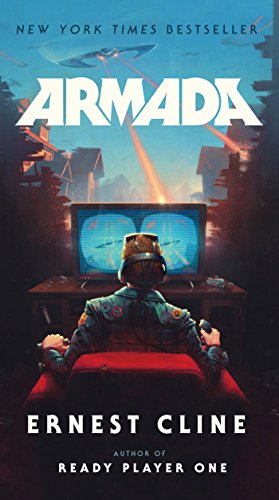 Armada: A novel by the author of Ready Player One
Buy Now

Review of Armada by Ernest Cline

Okay so as I wrote at the top in the disclaimer "I was given a free copy of Armada by Ernest Cline by Blogging for Book in exchange only for an honest unbiased review of the book." So the big thing to know is that the book is rather boring until it hits page 90. Prior to that it is a lot of writing about a kid who is high school who thinks he sees a UFO and then thinks he is going completely insane and if hallucinating. If you can stick it out past that part then you get to the Earth Defense Alliance that apparently has been influencing pop culture for a very long time to prepare the people of Earth for an eventual invasion through movies and video games.

To be completely honest while I love sci-fi books and moves I found this book a bit too "geeky" for me. It is just too out there, I think I would have liked it more if the main character was not as much of a geek and if the book got to the plot faster.

Besides that I would say that book read fine and everything flowered together as a plot line (even if it is really out there). There was no errors in the book in grammar, spelling, or punctuation.

While I would not recommend this book to a friend or family member I could see people liking this book just fine. People who enjoy books where the geek is a hero or conspiracy theories that turn out to be true would love this book. It is just not the book for me. To my fellow sci-fi fans make sure that this is the type of book you like before you buy it just because it is sci-fi.