As competitive as the book business can be, especially in the self-publishing world, I believe that writers have never been closer or friendlier towards their "competition". Sites like Goodreads and LibraryThing have helped to grow a community of support for self-published authors, offering tips and encouragement to fellow writers. We are on our own in terms of learning how to self-publish and self-promote, and advice from those who have done it before is extremely helpful.

Kylen Gartland has recently self-published her first YA novel, The Messenger, a coming of age story about a young wolf fulfilling her destiny. Below is my interview with Gartland who has three other novels in the pipeline but so far has gotten off to a strong start in the self-publishing world with a five-star rating of her book on Amazon.

I've written a total of four books, the first of which has just been published and released. The Messenger is available on Amazon in both paperback and kindle format. It's also available through the CreateSpace e-store.

In terms of genre and intended audience, I would compare The Messenger to series such as Warriors by Erin Hunter or Guardians of Ga'Hoole by Kathryn Lasky. My work is at least intended to appeal to fans of these successful women!

This was the material I read as a child. I consumed these books, hunted them out. Animal adventure is a genre that has grown in popularity some (largely thanks to Erin Hunter in my opinion). But I want to join in and expand it even further.

I wouldn't say that the experiences or characters are at all autobiographical. I do sometimes like to slip in issues that I thought about as a kid or ideas that I had difficulty overcoming.

Before I ever published, I used to post short pieces online. I had a very avid fan that commented on every piece and dissected them in detail. She had a million questions and even attempted to create a website dedicated to discussing my short pieces. It was the best encouragement I've ever had.

My greatest moment was holding that first finished copy in my hands. I could finally see the end product of all the work I had done. The only moment that could maybe trump that was when I received a photo of a complete stranger holding a copy of my book. It was absolutely mind-blowing and made all the rejections and trials seem more than worth the trouble.

My cover design was part of the publishing package. I wasn't fond of the original proposal and purchased a stock image to be used for my cover.

I would be interested in attempting to tackle mental disorders. There's still a huge stigma around mental illness, and I think it's a bigger issue than anyone likes to really admit or recognize.

I'm searching out publishers and agents for my upcoming series of young adult dystopian works. I'm simultaneously working on another series, but I can't say any more than that! The term "work in progress" is terribly apt in this case!

Buy a copy of The Messenger here! 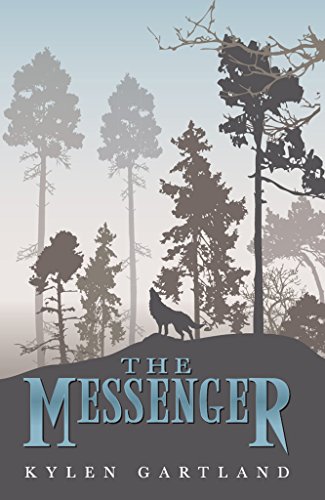