There have been so many books written in the world that it feels like there’s nothing that we haven’t seen before. However, with so many different writers sharing their perspectives, no two stories can ever be the same, and every topic and theme is worth exploring again and again.

Author Sherrie Bain is a writer who has a lot to say across many genres. She covers everything from fantasy to science, each with a different goal in mind and message to reach her readers. She cares about influencing her readers by exposing them to new ideas. Be sure to check out her books along with her answers to my interview questions below!

I’ve written one young adult novel, Midnight At Herlong Manor, and three children’s books. They are all available via Amazon and other major online retailers.

I’m not sure there is a book I’ve read that’s comparable to Midnight At Herlong Manor, but I would say it’s probably a little bit like a cross between the Indiana Jones movies and The Dark Tower series by Stephen King. However, my book series will focus on ancient/mythological creatures that are associated primarily with Native American culture/folklore a well as themes in American History. The first two books in the Herlong Manor series will focus on the still-unsolved mystery of the Lost Colony of Roanoke.

My children’s books are dichotomous in that some of them are more health-related on specific, real-life health topics, and some have more of a fictional narrative/adventure format, but the underlying goal is to discuss some kind of health disease or teach kids about a particular issue that is usually more challenging to address with children.

As you can probably tell from the previous answers, I don’t limit my writing to one particular age group, or even one particular genre. I feel that as a writer, I am inclined to deliver a story that I feel is worth telling. Sometimes that may mean it’s more suitable to a particular audience or genre, but I have no interest or intention of limiting my writing just to one specific target audience.

There is typically some element of myself in each of my stories, but I really try to allow the characters to speak through me as opposed to speaking for the characters.

When I was a little girl (about 10 years old), I had to write a story as part of a standard examination for all students in the country (Bahamas). It’s an exam that’s similar to the Common Core or SAT exams here in the USA, but it’s not just limited to one country. Other Caribbean countries also use the same exam, and it’s also used in England.

Sometime after I took the exam, I received a special letter telling me that the examiners felt my story had been “the best” they had read from all over the region—not just the country—the region. I was so proud of this, and my only regret is that I must have lost that letter by now. It may still be in my family home, but it’s likely that it’s not still around now. I wish I had framed it and kept it.

As a writer, I think just the accomplishment of finishing a novel/story is my greatest accomplishment. It’s one thing to have an idea for a story, but it takes a lot of discipline to actually sit down and write out a story.

I can really appreciate the talent and dedication of writers who have written 20 or 30 bestseller books. I hope that as I develop as a writer, I can also experience this kind of external success. With greater external success, it will translate into having more time to focus on writing, and I’m really looking forward to hopefully being successful enough in the future to devote more time to writing because I have lots of stories I want to share.

I typically design my own covers or sometimes I will use a freelance illustrator to design my cover from my personal concept.

Would it be narcissistic to say I’m my biggest fan? It’s the truth. I love reading my own stories because I feel that sometimes the characters develop in ways I didn’t expect. I get really excited to actually sit back and read about them as the story unfolds.

Well I have about 20 different story ideas already lined up so it’s just a matter of having enough time to develop these ideas. I’m not sure if I want to do a book of short stories, or focus on just one story. I know that my next two projects will be a children’s book and another young adult book. I also write professional scientific articles, and I would like to write another peer-reviewed article in my field soon.

In addition, I’m planning to write a book geared towards young girls. This book will feature some of the females who have been pioneers in my field (Microbiology).

My goal is to inspire more young girls to become scientists or at least have a larger interest in science. I think a lot of times girls who struggle initially in math or science will become discouraged because they feel that they’re just “not smart”. This could not be further from the truth. I think by highlighting some of the female pioneers in the field I will hopefully let girls see that it’s okay to fail or to struggle, but that failure is usually not the end of a brilliant career; it’s only the beginning.

“FIND HIM! So I can eat his eyeballs and suck out his marrow!”

It’s a quote from Herlong Manor. Gideon Spencer is being hunted by a very old and very angry witch.

Buy a copy of Midnight at Herlong Manor by Sherrie Bain 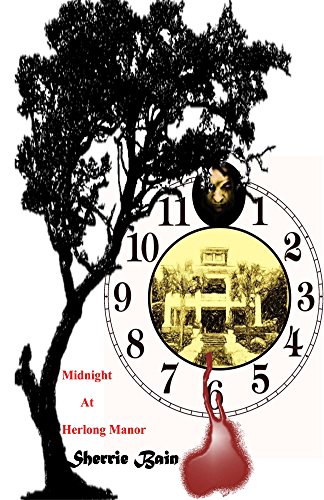