Geek, gamer, writer, graphic artist. Ced's favorite shows and adventures are those that allow him to enjoy the world from his bedroom.

My first Jonathan Kellerman novel was Over The Edge, his third one. I chanced upon this one afternoon in the public library in 1991. Dark, gripping and a little difficult for me to read back then because of the medical references, I was enthralled by the plot and spent several nights ploughing through the few hundred pages. This began a ritual that continues to today. I snap up every new Kellerman novel upon its release, be it from the library or from the bookshop. I stay up till very late, usually over two nights, to finish the book. And then I wait for the next release, assured by the knowledge that Kellerman, who is incredibly prolific, would soon be churning out another one.

I also tend to promptly forget the plot I just read. This usually happens by the next afternoon. In fact, other than Jamey, the “antagonist” of Over The Edge, I don’t remember the names of any other Kellerman murderers. Neither do I remember how the plots went, or even what the murders were. Within hours, everything becomes a case of somebody killing different people in horrible ways. This doesn’t despair me, though, because forgetting has long since been part of my “Kellerman ritual.” I spend two or three late nights glued to a Kellerman book. They return to the library or to my bookshelves having fulfilled their purpose. I have never read a Kellerman book twice, across 24 years.

Jonathan Kellerman’s greatest draw as a writer is himself. His recurrent character, child psychologist Alex Delaware, is often said to be Kellerman’s alter ego because that is exactly what Kellerman is too. A certified psychologist who has both published and consulted. In Alex Delaware, Kellerman projects his own idealised version. A stoic, insightful, quite physically hardy shrink who consults for the LAPD, and together with his usual partner, Milo Sturgis, is the scourge of crafty Californian psychos. This unusual combination of doctor and gumshoe is very much the main attraction of the entire Delaware series. I should however highlight that in newer stories, Delaware tends to rely more on investigative experiences or personal acquaintances, rather than clinical expertise. His psychologist knowledge does not feature as often as it did in earlier stories. Readers would certainly also not find CSI-like sort of clinical analyses.

In keeping with the whole psychologist-approach-to-crime angle, a Delaware investigation typically consists mostly of conversations. The usual plot: A gruesome murder happens. Or there is a strange disappearance. Hardened detective Milo Sturgis approaches his trusted police consultant for cooperation. Together, they transverse the dark streets of California interviewing suspects, witnesses and associates. Along the way, somehow, Delaware figures out everything. The story then ends with some action. For some, the final confrontation is non-violent, but features a shocking or very disturbing revelation.

The way I summarised the Delaware storylines might imply the books are insipid. Don’t be mistaken. They aren’t. Kellerman has honed his craft over the years and he is masterful with his prose. Particularly his dialogues, which could be colourful and quirky, or grim and terse. On top of that, you have truly gory murders, red-band trailer worthy. Garrotting, disembodiment, corpses sawn into half, Kellerman isn’t one who shies from violence. It is quite easy to lose yourself in the mesmerising quest to uncover the truth, going from clue to clue, suspect to suspect ala Da Vinci Code style. This remains so even if there are often way too many characters in a story, and you might actually have to refer to earlier pages to remember who the murderer is, when the name is revealed. In short, an Alex Delaware story is straightforward entertainment. Commercially attuned as well, the stories have all the usual ingredients for today’s mass market consumption. I doubt most readers would be bored reading a Kellerman novel. Or have difficulty finishing one.

A Formula For Mass Market Success

What does drag the Delaware books down, and increasingly so in recent years, is also the story structure. While murders and circumstances differ from story to story, it is always the same formula. Often, you can guess what’s going to happen. Detective Sturgis is thrown a tough case. He binge-eats in Delaware’s kitchen and they discuss the crime. Later, they go about interrogating and interviewing folks. One of these, often the least likely one, is the murderer. Delaware figures it out. Climatic confrontation. End of story. End of book.

Even the tropes are unchanged. Milo Sturgis, openly gay, is side-lined at work despite him having one of the highest solve rates. Alex Delaware occasionally reflects on his less than happy childhood, but there is seldom any further development or revelations. His girlfriend, Robin, is consistently reliable and understanding, and is perfectly fine with their cohabiting status. There is little character development beyond these raw definitions. You do not see Milo Sturgis enjoying any breakthrough in life or career, and his gay status goes no more than being just a “fact.” Alex Delaware doesn’t progress any further, or deeper, in his relationship with Robin. He seems to have no issues with finances or health too. It is almost as if the main characters are all frozen in time. They are locked in the same year perpetually, the only spice to their lives being jaw-dropping murders.

Of course, this is standard for many stories using recurrent characters. What disheartens is that Kellerman is obviously uninclined to vary the formula or experiment. Perhaps this is on advice of his publishers. Or maybe he reckons there is no necessity to risk an unpopular entry by trying new themes. Whatever his reasons, the Alex Delaware books, while still engrossing reads, are no longer suspenseful. In earlier books from the 90s, you have developments like Delaware finding a new girlfriend, or going on a trip with his current one. In Time Bomb, the fifth book, the story closes with Milo socking his superior. Today, there are none of these. There is just murder, investigation, and arrest. The impression I get is that Kellerman has settled on a winning formula and he is confident the formula would stay a winner. Because of that, reading Kellerman books nowadays are akin to watching a new sitcom episode. You sit down knowing what’s going to happen to whom and how and where. You do not bother that much with the plot, instead, the entertainment is from the interaction between familiar characters. You definitely do not get the sort of thrill say, from watching an action movie or a suspenseful feature. There is also little entertainment from understanding new themes or concepts.

It’s not all bad, I must re-emphasise. It could even be ideal for certain situations, like on a long-haul flight or a sleepless night. You just read and read and wait for the murderer to be cornered, then forget all about it. Once again, reading a Kellerman book is simplistic entertainment. And it stays strictly that. Nothing else more or less.

Would I Recommend Reading Jonathan Kellerman?

Yes I would. The predictability of his plots aside, the smoothing writing is easy to enjoy and digest.

Just don’t mind the many, many characters in every story. Or the unnecessarily wordy description of suspects’ physical traits. Read him instead to enjoy bloody murder tales injected with sordid family histories and unspeakable social deviance. One other thing, don’t expect too many medical references. While Thorazine and Clozapine were major plot devices in Over The Edge, Kellerman has long stopped using such explicit medical elements. Most of the time in the latest books, Alex Delaware relies on his previous medical networks to hunt for clues. He is still a psychologist, but mostly in spirit and title only. 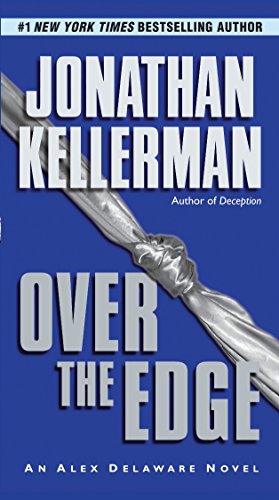 Over the Edge: An Alex Delaware Novel
Buy Now

Which Jonathan Kellerman Title Would I Recommend?

If you're new to Kellerman, I would recommend the following titles. I consider these the "best" of his works.

If you haven't, would you consider trying a Jonathan Kellerman book?