If you have seen my other reviews you'll know how I operate with my book reviewing, (if you havent you should read them too, their good) So when I review books I like to give you my opinion but try not to give away the story too much and I promise I will never give away a spoiler. I hate it when I'm reading a review and they tell you every detail of the story before you even have a chance to read it yourself, so I vowed never to do that myself. I'll give you a brief overveiw of the story (nothing more than you will gain off the back or general synopsis online) then tell you what I thought of it, who will enjoy it and whether it is worth your time (and your money, unless you use a library). Although I will never say to not bother reading a book at all as everyones tastes are different, this is simply my view of the book Birthmarked by Caragh O'Brien

After reading the Hunger games and loving it I have been slowly seeking out other dystopian teen novel series. The Birthmarked series was one of the first ones I found. It sounded interesting and the kind of thing I would like so I thought I would check it out.

So here's a bit of storyline...

Set in a future where the masses of civilization have died out due to lack of resources and other yet to be known causes, there are those who live within the 'priviledged' walls of the Enclave and those who live outside. Our 16 year old heroine Gaia Stone lives outside the wall with her parents and has trained to become a midwife like her mother. She must deliver babies outside the wall but hand over a quota to the Enclave to be 'advance'. As hard as this is sometimes Gaia belives it is her duty to follow the Enclaves orders. That is until her parents are arrested and sentenced as trators by the very people she has been serving. She learns there is a lot more to what the Enclave have been doing and begins to question everything she has been taught. She must try to save her parents from the fate of Death, try to understand what has being happening in the Enclave and not get herself killed whilst doing it.

Obviously there is a love interest (I mean it wouldnt be a teen novel without one) but it's not too heavy and definitely plays second fiddle to the moral and emotional dilemas Gaia is faced with. The tale unfolds with Gaia's need to do what she thinks is right, the honour and love she feels towards her brilliant parents, her developing understanding of what is morally right and wrong, hidden codes, promised lands and the helping hands of friends.

I'll let you discover the rest on your own. 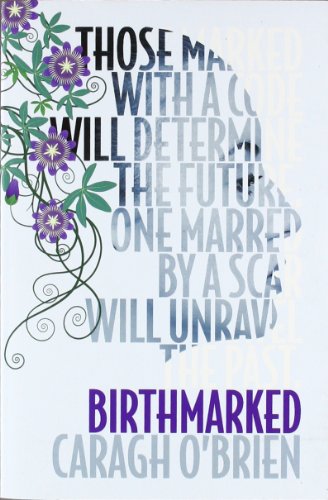 I wont compare this too much to other dystopian novels as they are all so different, in regards to the fact that each new world is very contrasting to the others. But lets just look at the general story line, writing etc in comparison to other books in the same genre.

Writing wise, it is very well written, simple to read but still with enough thought put into the style to make it a good read for adults as well as teens. Its quite easy to get hooked and blitz your way through it at a fair speed.The storyline for me is great, it deals with some real human moral dilemas. There are many high and low points in the story, and some truly heart breaking points. Although the storyline isnt as brutal as the likes of The Hunger Games I find you still become engrossed in the welfare of the characters and will them on to succeed like The Hunger Games. I would put it level with Divergent (if you have read that). The idea of the Enclave and outside the wall is something that is pretty believable as it channels almost medieval ideas, The privileged inside the castle walls and the 'peasants' outside the wall, forced to do whatever the wealthy say as they control the resources - mainly the water and food in this story!

This is a little more girly though than The Hunger Games and Divergent (both of which I think men would enjoy too) it is more on par with Matched in that sense.

Well you kinda get some of my opinion from the section above. I really liked the book, found it easy to read, very engrossing, relatable, believable and a little girly but there is a lot more to it than that I think.

I often find in teen novels the love stories are just to much fluff for me, but luckily, although there is a love line in this it really isnt too sappy! If anything our heronine attempts to shy away from advance from male characters as she doesnt feel worthy or privileged enough, due to a nasty childhood scare marking her face. But the love story is still there, and allows us to feel even more deeply for the character of Gaia.

The society itself, like I said is very believable. It almost sounds medieval, especially the way they treat those outside the wall like peasants. Plus the guards are treated almost like honourable knights. But they are more advanced with some modern technologies. Its an interesting way of thinking, that after the world population almost dying this could genuinely how they decide to re-populate. I like the mixture of modern technology and medieval ways, it makes for an unusual combination. They understand micro nutrients and genetics, yet they still punish people in medieval prison cells for not staying in line and hang people.

There are lots of twists and unknown discoveries throughout the book, most were a little predictable but some weren't. They mean the story is constantly changing ever so slightly and developing. I really liked how the other allowed only little bits of information through at a time and really made Gaia work for more information!

My rating for the book Birthmarked by Caragh O'Brien

4 stars for Birthmarked by Caragh O'Brien

Well I gave it a 4 out of 5 on my Goodreads profile and I think that is a fair score (very few books deserve a full 5 from me, lol!) I really liked it, and really look forward to the last 2 enstalments in the series - Prized and Promised. It definitely draws you into the story and the author really makes you feel for the characters plight.

In all honesty I wouldnt change that much of the storyline, there isnt a lot that I would improve on. Anything you add would just be fillers as the story is well rounded and well detailed. Maybe understanding a little more about the history of how they came to be seperated by the wall. And if we could have had more storyline on her parents plans - but I suspect we may get more information on that in the following books.

Would I recommend it?

Yes I definitely would. maybe mainly to a female readership as I think it definietly leans towards a more feminine and maternal side. But i would say that women of most ages would enjoy this story. Its maybe not totally as gripping as The Hunger Games as there isnt so much violence and suspence but it is still a very compelling read. And I cant wait for the next part in all honesty as the end leads you onto the next adventure and challenge Gaia will no fance, the consequences of her actions!