Book Review: A Broth of Betrayal by Connie Archer

When the residents of this quaint little town become aware of the construction of a car wash right in the center of town, everyone is up in arms, but when a skeleton is found on the site, then everyone becomes intrigued. But, it's not the only mystery to be solved in town.

Mechanic Harry Hodges has been murdered in his shop and Lucky Jamieson's grandfather is the first to discover the bloody corpse. While the mystery of why Harry was murdered continues, Mayor Elizabeth Dove disappears and no one knows why.

The bones and past brought back the plot of Die Job by Lila Dare, but doesn't go into the past like that novel. I brought this up just in case any readers remembered this particular storyline.

When Lucky discovers that Elizabeth is missing (she's close to Lucky since she was her mother's best friend and has now become sort of a surrogate mother to her) she and former nemesis Sophie go looking through the back roads of town hoping to find some type of clue.

During the re-enactment ceremony of Colonial Vermont, the trailer with car wash owner Richard Rowland catches on fire and kills him on the spot.

I think this is by far the only crimozy where there was so much going on and didn't find my mind wandering. With all of the action going on, it was a little hard to keep up with the cast of characters, but just when you think you have it figured out, Archer turns the tables on you and you're pretty much back at square one.

By far, this series has been great so far, and hopefully when it ends (there are five installments) it will come to a satisfying conclusion for all involved. Characters that is. 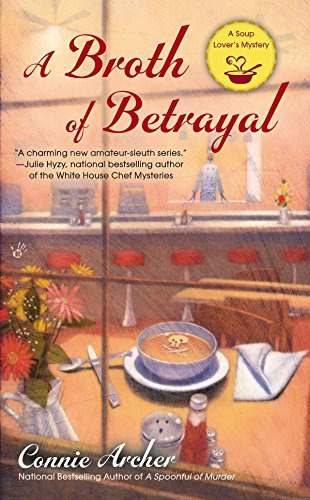 A Broth of Betrayal (A Soup Lover's Mystery)
Buy Now