Even though it took me forever and a day to get to this installment of the Italian Kitchen Mysteries, it was like joining old friends for dinner and a drink.

The summer tourist season is coming to an end and the Casa Lido restaurant is getting ready to celebrate seventy years of service when a hurricane is threatening the New Jersey shore.

But it may not be the impending storm that threatens this celebration.

”Stinky Pete,” Oceanside’s homeless man appears in the restaurants kitchen and tells writer Victoria “Vic” Rienzi that he has a lot of stories for her mysteries.

Vic blows him off as just being his crazy self but when the storm hits and he’s found dead she starts to put the pieces of the puzzle together. At the same time, while trying to write her historical romance based on her grandmother, some of the clues to Pete’s death are found in books and articles, along with a long lost relative.

With suspects from the past and present, Vic find herself trying to save her own life.

While the plot of this crimozy has been used in similar series, Genova‘s use works much better since the characters of the past were documented in fictional publications which makes it more believable as the present characters have something to reference.

Also, these characters are a lot of fun, meaning that you feel like they’d welcome you into their world with no hesitation.

As this is the last installment I think it did end on a good note. There were no cliffhangers and Victoria’s summer of discovery does come to a close.

It’s probably best to read this series during the dog days of summer when they were meant to be read. 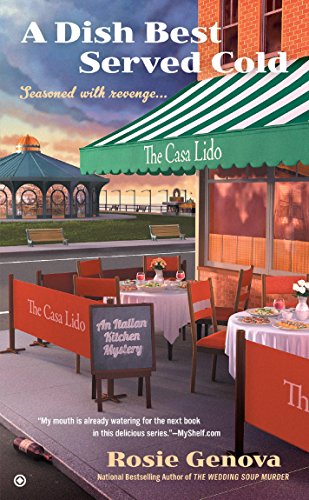