Retro Reading: A Grid For Murder by Casey Mayes

Thankfully even bad things come to an end.

That pretty much sums up this series as Zach and Savannah Stone solve yet another unnecessary murder.

Self centered puzzle maker Savannah has a few errands to run in Asheville and while in town decides to stop at her favorite cafe. Unfortunately, she runs into Joanne Clayton and Joanne can’t wait to tell her that she too is now a published puzzle maker.

Later that day, she finds out that Joanne has been murdered and Savannah is the prime suspect (out of three installments she’s been a suspect twice).

Zach, who turned down the chief of police job in Asheville, contacts the interim chief (who was just appointed that day!) and takes Savannah in for questioning. He thinks this will look good for her and after being questioned, she goes home while he helps out with the investigation.

Once home, Savannah starts poking around with hardware store owner, Rob Hastings and they come up with seven or so suspects who would love to see Joanne dead.

As the couple do their own investigations, they manage to keep information from each other and even though Zach is now an independent consultant, I don’t think he would be able to get as much information if this were the real world. Plus, he’s volunteering his time, yet acts like this is his investigation. Eye roll please.

If you’ve ever seen Silent Night Deadly Night Part 2, remember when Ricky is being interviewed by his doctor and he keeps emphasizing what‘s about to come? Well, that’s kind of how this is written.

Because these characters are so into themselves you really feel no empathy for them and wish both would be locked up.

With the resurgence in reboots, let’s hope that this series never sees the light of day. 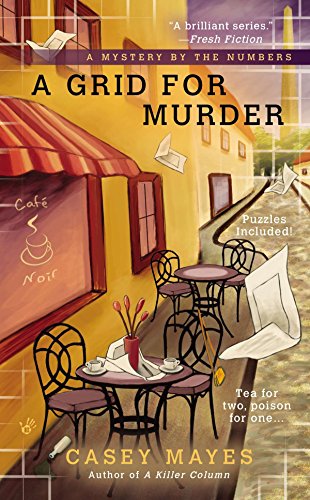 A Grid for Murder (A Mystery by the Numbers)
Buy Now