If you've ever seen the movie Steel Magnolias then you're familiar with Shirley MacLaine's character Ouiser Boudreaux. If you read the first installment of the Books By The Bay Mysteries, you'll probably come to think that the main character, Olivia Limoges is a younger version of MacLaine's character.

Olivia is the type of person people avoid. She's not the most friendliest resident of Oyster Bay and due to her wealth she thinks she can get away with whatever she wants. Then again she owns most of the property in the small ocean town so she does get her way.

She lives alone by the lighthouse on the outskirts of town and one has always dreamed of being a writer. Usually on a daily basis she heads into town with her faithful companion, Captain Haviland, a standard poodle and spends much of the day at Grumpy's where she writes her book, a little diner dedicated to Andrew Lloyd Webber.

On this particular day she comes into the diner and there's a group of people sitting in her booth. Frustrated, she has to end up at the counter and then eventually finds out the group is a writer's group, led by Camden Ford. Ford is in town gathering information on the Talbot family so that he can write a bestseller about the secrets and scandals of this family. Unbeknownst to the others, he's also writes a celebrity gossip blog under a pen name.

Camden and Olivia meet and he confides in her of his plan while they're at her restaurant The Boot Top. It just so happens that the youngest Talbot (a rock star) and his girlfriend, Heidi St, Claire, an up and coming actress are seated in the booth behind them. Of course, Camden wants to hear what's going on.

After Camden invites Olivia to join the writer's group, she sets on a new path. She redesigns her cottage house so that the group can meet there and on the night of the first meeting, everyone is a little upset that Camden hasn't shown up. One of the group's members, Millay, tells the group that she saw him going into the bar she works at Fish Nets. The bar would be out of Camden's league and they all decide to go into town to find him.

They find him alright. Dead in an alley with a haiku spray painted above his body.

The group then try to figure out the clues through the haiku and are stunned when yet another murder happens and another haiku. This is followed by a third, and while the haiku's reference seasons who will the fourth victim be?

Author Ellery Adams' A Killer Plot invites us into a charming North Carolina seaside town where the town has become a hot tourist destination and most of the men are fishermen. It's quaint.

Another positive point is how Olivia reluctantly joins the writers group (and if you're a writer forming or joining one can be a task in itself) but, I don't think we needed to "read" chapters of what the writer's novels are about. It takes away from the story and it was a good idea to include them in the investigation, but as they say, there were too many cooks in the kitchen (as well as characters).

Olivia's a character I wasn't vested in and just found her to be plain mean. She does have some good traits but for the most part I wished she would have been killed off. It was a struggle trying to get through the book, mostly in part due to the narrative. There was too much and not really enough dialogue.

I'm hoping that through the rest of the series the action picks up and maybe then I'll become more invested in Olivia and the others.

As of January 28, 2021, this series has caused quite a bit of controversy among crimozy fans and some have turned on the author.

The series debuted in 2010 and the final installment was published in 2017 (I'm not going to reveal what happens in it) but the reaction has kind of been like Annie Wilkes in Misery.

Adams has been busy trying to explain her decision for the ending, but as an author, she really shouldn't have to since this is her series and story. She took a character who started out kind of mean and then at the end shows her vulnerability. 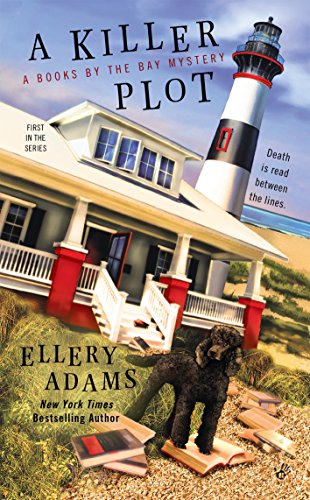 A Killer Plot (A Books by the Bay Mystery)
Buy Now