Book Review: A Tale of Two Biddies by Kylie Logan

Back when I was in freshman English in high school, one of our assignments was to read (I think) an abbreviated version of A Tale of Two Cities and there was some other stuff we had to do.

The Dickens era really isn’t my favorite, but I had fun doing the other assignments associated with the story. Every time I think of the classic novel my mind goes back to the fall of my first semester in high school.

Anyway, the League of Literary Ladies have chosen this classic as their book discussion and it coincides with Put-In-Bays Bastille Day week long celebration.

On tap for the week are a Charles Dickens trivia/look alike contest, fireworks, parade and the rock group, Guillotine (formally the ‘80’s boy band Boyz ‘n Funk). It’s definitely a busy week for the residents and tourists of South Bass Island.

B and B owner, Bea Cartwright doesn’t know the problems she’s about to face as the group checks in and the devoted fans keep vigil outside, led by Tiffany Hollister. And these women are trapped in the ‘80’s with their shoulder pads, high hair and blue eye shadow.

When island resident Richie Monroe drops off breakfast he has a run in with lead singer Dino, who claims not to know Richie.

Interestingly enough, Richie is a) accuses someone of pushing him into the lake the night before; b) at a mini concert, he’s accused of messing with the prop guillotine at the bar and c) he’s found dead in the bar.

Meanwhile, the Defarge twins have their own secrets regarding Richie, as well as their own.

Then there are the Dickens characters who have landed on the island, each having their own reasons for being in the contest.

And of course, Dan Peebles, the Used Car King of Toledo. If you know a used car salesman, there’s no need to even begin to describe him, but he figures into the story because Richie accidentally blew up his summer home.

For the sophomore entry in the series, Logan has done an excellent job of maintaining a story that is great and providing very dry humor. It’s definitely another page turner and while she states in the acknowledgments, there is no Bastille Day celebration on the island, but she makes it seem like it’s a real celebration.

The only downside was it started to read as a crimozy, only because of what I’m sure is a budding relationship between Bea and Levi.

Bea’s keeping her secret from the rest of her friends, but I think when (and if) she tells them, a lot of questions about her will come to light.

An added plus is seeing how a modern day author takes a classic and spins it into a new story. 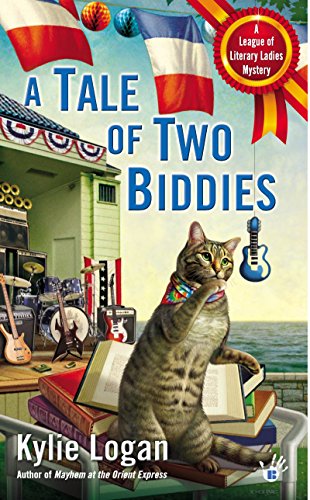