Book Review: And Then There Were Nuns by Kylie Logan

The third time is definitely not the charm here. It’s the fourth.

A year has gone by on the island of South Bass and with spring in sight, a former mansion has been transformed into a retreat and a gaggle of nuns have come for a week of learning with renowned speaker Richard Ward Parker.

Once the nuns get settled, Sister Liliosa receives word that the famous speaker won’t be coming due to a scheduling conflict. They decide to take matters into their own hands and set up their own agenda.

Back at Bea Cartwright‘s B and B, a group of rowdy librarians arrive, along with a bird watcher and a genealogist. Bea has agreed to help out with the nuns since the caretaker is away on an emergency.

Sister Sheila Buchwald is later found dead at the water’s edge, which is ironic since she was terrified of the water. It doesn’t take long before is asked to help with the investigation.

But, this isn’t all that she has to worry about.

The first is she plans on putting in an inground pool and herb garden (which runs along the property line of the B and B); add a huge lamppost (which would keep other neighbor Kate up all night) and she has become the secretary to a controversial group that wants to ban fishing in Lake Erie. This would impact their other neighbor, Luella Zak, since she runs a charter fishing business.

The next day, one of the other nuns disappears and while talking with another, a portion of the mansion falls, narrowly missing Bea and Sister Caroline.

While the secret Bea has been carrying around is finally revealed, bar owner Levi also reveals a jaw dropping secret which jeopardizes their possible relationship, whether romantic or not.

When the librarians learn of what’s happening with the nuns, they suggest that Bea read And Then There Were None.

With the help of the other Ladies, they have to work together in order to stop any future murders.

Thankfully Logan has gotten the series back on track by including all of the main characters , but the downside is there are a lot of characters which can get a little crowded at times (especially with the nuns). And while emotions are spilling over with Chandra’s plans, it was good to see what brought this crew together.

As with the past installments, there are a lot of red herrings and in the end, everything works out in this page turning series. 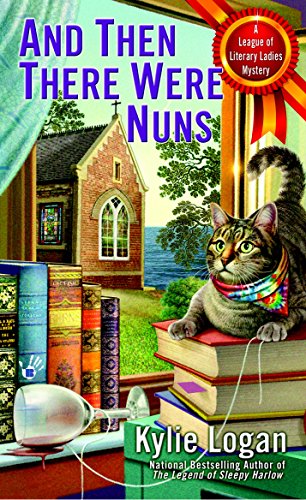