It’s been such a long time that I’ve actually been excited about getting into a crimozy. And I think you’re in for a treat.

Audrey Bloom and her cousin, Olivia Rose are partners in the Rose in Bloom flower shop and as the story begins, Audrey is being interviewed for a feature with the local newspaper.

While being interviewed, she tells the reporter about different flowers and what they and their color mean. Intrigued, the reporter asks other questions regarding the number of successful marriages the shop has produced. Audrey suggests that she really has no idea why the success rate is so high and it’s news to her.

Once the interview is over, her former best friend, Jenny Whitney comes in for a consultation regarding her upcoming wedding to Derek Rawling.

The next day she returns and cancels the order because she’s going to break up with Derek and asks Audrey for a job. Audrey sends her home with some supplies and flowers so that she can practice making bouquets.

When Derek is found murdered in his car the following morning (outside Jenny’s apartment) by Olivia’s husband, Eric, Jenny is taken into custody where she pleads her innocence.

Due to Derek’s murder, the flower shop has an uptick in orders, plus they have an important wedding to prepare for.

Everything about this novel is excellent.

The story is extremely fast paced and the characters and dialogue are well written. It’s really like you’re a part of the story and you want to keep it going.

Allen has hit a home run with the first installment and if the pace continues, this will be a pleasure reading. 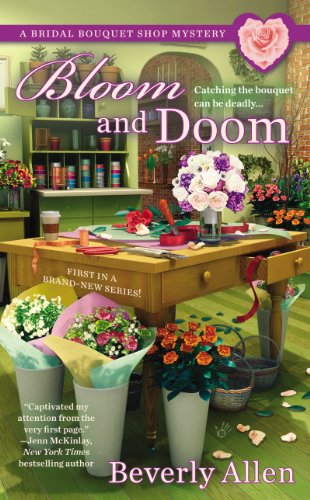