Had I not been in the throes of selling a house and moving, I would have been through with this series, but I have to ask myself if I would be happy or sad?

In this installment, literary agent Lila Wilkins is busy putting the final touches on the Books and Cooks festival (an offshoot to Inspiration Valley’s Taste of the Town Festival) and is excited about the upcoming weekend.

Television chefs and their egos are the main attraction for the weekend and Lila realizes that what you see on television, doesn’t mean that the personality is the same in real life. It’s a hard pill for her to swallow.

At the inaugural dinner, up and coming chef Joel Lang is murdered (by far his murder has to be the most inventive murder ever for a crimozy) and it’s not the secret ingredients that start to come out.

While his murder casts a shadow over the festival, there’s another murder waiting right around the corner, but it’s sort of predictable.

The problem with this installment is two fold.

There are too many characters and the action doesn’t happen for quite awhile. With this as the major problem, the rest of the novel reads like a weekend at the agency.

For the most part, the regular characters are developed great and I can’t think of any reason why you wouldn’t like them, but for this installment, something is missing.

However, this has been a good series thus far and but it’s hard to say at this point if Arlington can keep the interest level up. But, this installment was somewhat predictable especially the ending.

With two more installments to go, hopefully things will end on a more positive note. 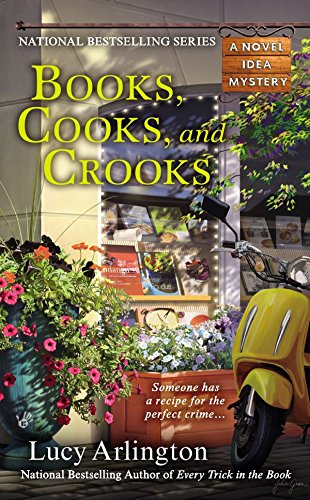