Get ready for more Mackinaw Island mayhem as the residents prepare for the annual Lilac Festival and the invasion of “fudgies.”

Instead of returning to Chicago, Evie Bloomfield braved the harsh Michigan winter on the island and is hoping for a successful bike rental season. She‘ll pretty much be on her own since her partner, Rudy, is getting married to fudge shop owner/neighbor Irma.

As Irma’s maid of honor, Evie has been doing her best to make sure everything runs smoothly, but when the wrong wedding dress is received she has to keep it quiet from the bride to be.

Receiving the wrong dress is the least of Evie’s worries when she bikes up to the Grand Hotel to exchange dresses and stumbles over the body of Peephole Perry, her best friends former boss from Los Angeles and questions why Fiona is at the scene.

Fiona high tails it once police chief Jake Sutter comes onto the scene and guests at the hotel think they’ve stumbled upon a secret murder mystery sponsored by the hotel. Sutter does his best to convince them that this is a real murder scene, but when word spreads among the guests, teams of amateur sleuths are formed.

Fearing tourists will stay away in droves, Evie plays along with the guests while trying to prove Fiona‘s innocence and put out the fires of the bad luck Irma’s wedding is facing.

I’m not sure how Brown does it, but writing comedy is the hardest type of writing, yet she does it effortlessly. Her characters are quirky and just so much fun. You’all want to spend more time with them since they’re so well written.

Typically with crimozies and weddings, a lot of the emphasis is placed on the wedding and the problems the bride is facing and of course the murdered guest. But, not in this case.

Brown has incorporated the wedding, murder and the hotel guests into the perfect package of mayhem. The guests have their own agendas and they are more involved with what is known as The Peep Show.

You’ll have a lot of fun with this series, but again the book doesn’t have a real proper ending which is a disappointment. 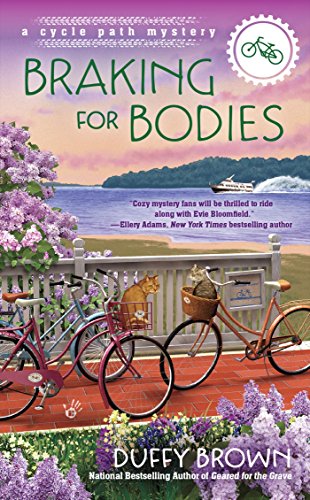