That Regular Button Could be the Button of Doom

For the fourth installment of the Button Box mystery series, author Kylie Logan has gone off track with the typical murder mystery. She delves a little into the occult in which someone has the deadly Button of Doom and wasn't afraid to use it.

In Buttoned Up Button Box owner Josie Giancola has been invited by artist Forbis Parmenter to bring a specific button to help finish his latest project. Of course Josie can't resist and she along with her cop boyfriend, Nevin Riley, show up to the opening of the exhibit. The one thing (besides murder) the couple weren't expecting was Nevin running into his ex-fiancée Evangeline Simon. Of course running into ones ex-fiancée with an impending murder can always be an unnerving experience.

Mildly put, Josie is a little uncomfortable but she's there partake in the festivities and once Forbis takes the button from her he's literally scared to death and runs out of the church which also doubles as an art gallery.

At first the tension between Nevin and Josie is minimal to say the least, but as the story progresses it becomes more apparent where the two are at odds and Josie soon seems to find comfort in the company of Gabriel Marsh, a British "arts journalist" who happens to know a lot about the Button of Doom. He also begins to trail her as she becomes more curious about this particular button and the history behind it.

As the days progress, she becomes sick, passing it off as the flu (in the summer) but once Marsh sees her, he knows it's much more than the flu. Someone has put a voodoo curse on her and the only way for her to survive is to have the curse reversed. Since Gabriel is a world traveler, he just so happens to know someone who can help reverse the spell.

From the very beginning, this is one book which is quite literally hard to put down. It doesn't read as your typical crimozy and at the same time the introduction of the Button of Doom is quite intriguing since it's something you would only expect in a horror related novel. Logan could start a franchise of thrillers since the statue in the beginning is quite literally a little hard to get out of your mind.

Whenever the statue is brought up that image haunts you, plus, once Forbis' body is discovered you'd never expect to have a face have buttons covering the eyes and mouth.

Start with the first installment in the series and then see just how much Logan deviates from the series. You'll be amazed. 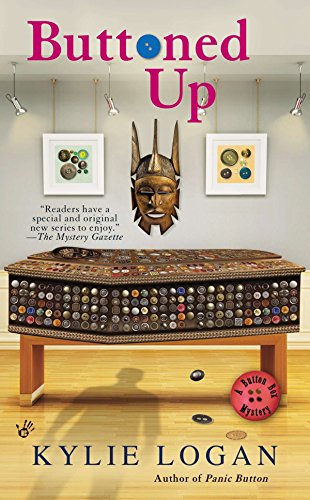