How do you follow up a first book with an intriguing storyline into a second installment? Well, you go back to using the old formula for a cozy.

Unfortunately, this is what happens in the second installment of the Nick and Nora Charles mysteries.

After the events of the first novel, Nora Charles has settled into the routine of running her sandwich shop, Hot Bread and after closing one night, gets a frantic phone call from her Aunt Prudence regarding her sister Lacey. She's been arrested for the murder of her art professor Thaddeus C. Pitt.

Lacey is having a hard time "finding" herself and is currently enrolled in the prestigious Pitt Institute. Earlier she had a meeting with him regarding her low grade and it was confirmed that she was standing over his body with the knife used to kill him. Stabbed right through the heart.

Students agree that she was overheard yelling at him and had threatened to kill him.

Nora leaves to be there for Lacey and the justice system has no justice for Lacey since she's the perfect suspect.

As the trial is pushed up and up for her, Nora pretends to be an heiress named Abigail St. Clair and says that she's interested in possibly going to school there. She mingles with the students and has a run in with Leroy Samms, who's now a detective with the St. Leo Police Department. The last time she saw him was while the two were in college and worked on the school paper.

Samms wanted to be a reporter, but decided to follow in his father's footsteps much to his chagrin. He is rather envious though of Nora for pursuing her dream of becoming a reporter. (It's hinted that the two of them also dated, but never really revealed).

Anyway, Nora continues to investigate with the help of Oliver Sampson (who was Nick Atkins' former partner and the feline Nick's former owner) until the two of them are busted by FBI Special Agent Daniel Corleone.

After eavesdropping on a phone call between Samms and art gallery sales consultant/model/student Julia Canton, Nora stumbles across Julia's body in a warehouse and now she has to prove that she, too is innocent of murder.

With two murders, Nora has a lot on her plate, but trusty feline Nick comes to the rescue always providing just enough clues for Nora to follow until the real murderer is finally caught.

I'm not going to lie here and say that this is a stellar book, but, in all honesty, I lost interest after a few pages into the story, because, it started with a bold faced lie.

While reading the acknowledgments (I'm one of those people) LoTempio thanks "to the fabulous copyediting team" and it's also stated that there was a new editor helming this installment. I seriously tend to agree with this fabulous team.

In the first book, Lacey and Nora's mother's name is Laura and is referred to as Sharon (even if one time). But the list of errors goes on.

Aunt Prudence is also said to have moved several times (as indicated in the first installment) and Lacey moved in with her. They live around Carmel and the fictional city of Cruz is about twenty minutes away.

It's implied that when Nora leaves to go to her aunt's that it's going to take hours for her to get there. Even when she arrives her aunt mentions that she must be exhausted. There are several times when she stays the night at Prudence's "because of the drive." I wanted to pull my hair out since it's supposed to be a twenty minute drive.

In another instance, on one page Nora is wearing a skirt, next page a dress. Now that's some quick changing.

Other than this editing rant, I was still happy with the story, since it was dealing with the possibility of fraudulent art (which is something that one other crimozy dealt with) and there are some sandwich recipes listed at the end. They sound good, but I won't attempt them.

And, I also have a feeling that the character of Nick Atkins will be popping up in the next installment which will be the last one. 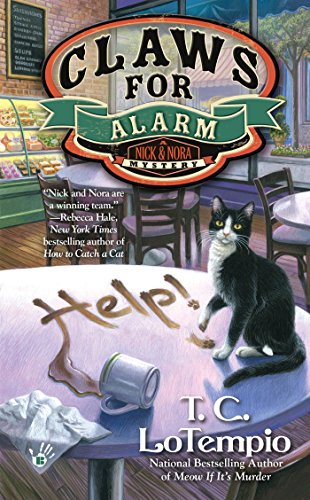 Claws for Alarm (A Nick and Nora Mystery)
Buy Now