After six previous installments, one would have hoped that maybe the series would have improved, but there's nothing in this installment to get excited about.

With the events of the past mystery behind her (roughly two or three months) Nell Pratt is starting to embrace her job as the president of the Pennsylvania Antiquarian Society and her living arrangement with FBI Special Agent James Morrison. That is until one November morning she receives an unexpected visit from Tyrone Blakeney and Cherisse Chapman, members of a local neighborhood rescue program.

It seems that the Society has an abandoned house in a rough part of Philadelphia which is scheduled for demolition. This is news to Nell since the Society doesn't own any property and she later agrees to go to the property with the two.

Sitting outside the last abandoned row house that afternoon, Cherisse notices a car circle around the block and as it slows down, Nell notices a backseat passenger with a gun. Soon there's gunfire striking Tyrone and killing Cherisse.

Nell escapes unscathed and James comes to her rescue and they go home.

Once Tyrone is feeling better, he requests a meeting with Nell in his hospital room along with Detective Meridith Hrivnak, Nell's nemesis on the police force. The detective knows that Nell's not really involved in the shooting but hounds her for as much detail that she can remember. Tyrone is also of no use since it happened too fast for him to comprehend what was going on at the time.

Meanwhile, the Society has been contacted by the wealthy Oliver sisters regarding their property. The spinster sisters are up in age and want their family home to be put to good use before they pass away. Nell doesn't want to be a part of this, since she's repeated over and over that the Society doesn't get involved with real estate.

Once Tyrone is released from the hospital, Nell contacts him and she comes up with an idea that might help benefit his cause. She takes the proposal to the staff and gives them a few days to help come up with a plan.

Feeling good about the plan, she heads into work one morning where she sees a shady woman waiting outside the Society. It's Tyrone's wife, Vee, and the two have a meeting. Nell finds out Vee's an investment banker with a prestigious firm in the city.

As the details of Nell's plan come together, she meets again with Vee in the hope that the Society can help with the neighborhood cause.

Basically that's the gist of the novel. A shooting/murder and Nell continues with her elitist life.

The idea for the book (as usual) was an excellent idea, but somewhere along the way the story just doesn't grip you. Probably because a few pages in, you realize that there's a major problem with continuity.

Nell reflects on how she had come to hire her assistant, Eric (two years earlier) when he's only been with the Society for less than a year. The same goes for Shelby Carver, who was hired first.

Little things like this are annoying when you're reading a series, but what can I say? I can say that as a main character, I haven't been too impressed with Nell. As usual, she treats Eric like one of Pavlov's dogs and expects people to be at her beck and call.

There's one installment left in the series, but I'm taking a break from the Society until next year, when I order for the year. 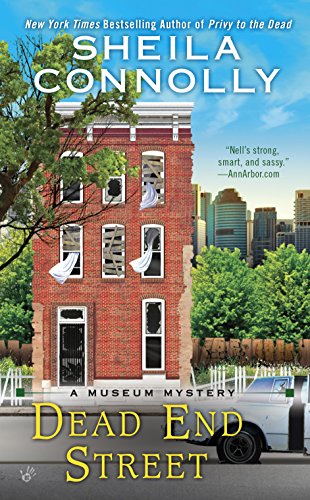