Over the course of reviewing cozy mysteries, there have been a couple of food truck installments in a series, but I don’t think that I’ve ever read a series devoted to a food truck.

As with every formulaic cozy, our main character, Zoe Chase, has quit her job at the local bank and invested all of her money into a dilapidated diner and a food truck.

The twist here is Zoe‘s diner is in a bad section of Mobile, Alabama and her parents and boyfriend think she’s lost her mind.

As the story begins, she’s made roughly $50 for the day and per usual, she donates the left over food to the men’s homeless shelter down the street where her friend Ollie lives.

Ollie watches over her and on this particular night, she sees Delia, a bar waitress, standing on a corner. Zoe gives her one of her biscuit bowls and Delia then leaves in a mysterious car.

When Zoe returns to her food truck, she finds the body of Terry Bannister (owner of Terry’s Tacky Tacos food truck) and becomes a person of interest.

While being questioned by the police, she sees her boyfriend, Tommy Lee, kiss another woman and at that point decides to call it quits.

Ollie calls his friend, attorney Miguel Alexander, but then her mother, prominent attorney Annabelle Chase comes on the scene.

Zoe shoos her mother away as she hires Miguel and takes him back to the diner.

He discovers that she’s living in the diner with her cat and she explains that she also gave up her apartment.

Anyway, Zoe is cleared and she and Miguel start looking for the real killer.

That’s pretty much the story and unfortunately, it’s not really that engaging.

The characters are great (and there are a few good suspects) but the story is very flat and dull.

What drew me to the story was the fact that the setting is in a rough part of the city and how the character is adjusting to her new life.

I think I had lost interest in the story when after Zoe invited Delia to move into the diner with her and offered her a job. That was all fine and dandy, but after the day, Delia disappeared with no explanation or mention, but comes out of the shower.

At that point I lost interest and to me, certain events seemed choppy.

As with a food mystery, you’ll find recipes at the end, especially for the biscuit bowl. 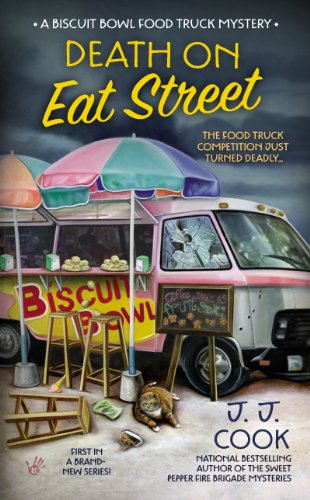