I'm not doing a poll here, but did you ever not want to go to your high school reunion? If you've ever had those thoughts you've been missing out on a great night out.

Well, not in Melanie Cooper's case.

It's her fifteen year class reunion and Angie is pestering her to go. Both she and Tate are looking forward to it and Mel doesn't want anything to do with it. Even though Fairy Tale Cupcakes is providing the dessert.

Cassidy starts right out of the gate once she sees Melanie. The bullying picks up as if it had only been a few minutes since they last saw one another. And really, Cassidy is one bitch no one wants to mess with.

She still has her entourage and later when her husband, Danny, asks Mel to dance (during high school, Mel had a crush on him) she grudgingly accepts and of course Cassidy sees them on the dance floor and all hell breaks loose.

Later, when Mel decides to leave, she goes into the bathroom and sees Cassidy passed out on one of the sofas. She doesn't know if she should freshen up or just leave, but as she's backing out of the bathroom, two other classmates enter and they discover that Cassidy is indeed dead.

Mel, obviously becomes the prime suspect since M E L is written in the stall in lipstick and Cassidy did have a tube of lipstick in her hand.

With everyone putting the blame on Mel, she agrees to take a polygraph test in the middle of the night and passes. Cassidy's minions can't accept it and still place the blame on her.

Mel again doesn't listen to her Uncle Stan (or fiance' Joe) and starts snooping around where she shouldn't. Once again, she's able to get more information than the police get and just as she thinks she's found the killer, everything changes on her.

I think everyone who reads this installment will clearly see themselves when it comes to the class reunion. Some people change, some don't, but for the classmates that are featured, these really are some characters.

I'm pretty sure that McKinlay was possessed by Cassidy, since this character is really cruel. She makes the mean girls from Romy and Michele's High School Reunion seem tame. Cassidy really is one hot mess.

Remembering reunions past also made this a quick read and I really wished that the reunion was a little bit longer. McKinlay didn't give too much of a buildup for the reunion, since chapter two has Mel and Joe in the parking lot of the venue. I think it would have been better to have had Mel, Angie and Tate discuss some of the future characters and give us a better understanding.

It was pointed out that Angie was always on the fringe of being popular and since she was pretty much accepted by everyone at the school, maybe there could have been another sub plot with her and the popular people.

It just seems like something was missing with the others from school, but not only is Cassidy written so evilly, the other characters who still cling to their high school days are written just as well.

I don't know if she had planned on writing a parallel to Romy and Michele's High School Reunion, but I did notice some resemblance and both Romy and Michele were also from Arizona.

Anyway, it's a good read and the next installment won't be out until April 2020, so get to reading this series if you haven't! 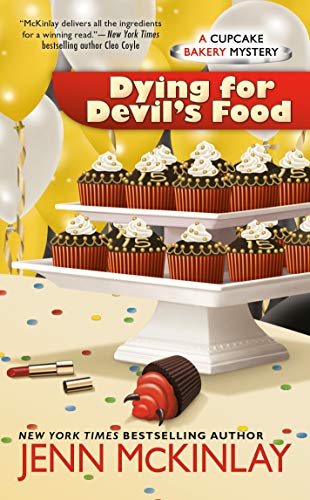