This Egg Dish is Really Hellish

There's an old saying when it comes to writing a mystery. If you want your readers to continue you have to kill off someone within the first 10 pages.

The victim in Eggs in Purgatory is lawyer Bobby Waite and is discovered by main character Suzanne Dietz after he stops into the Cackleberry Club, a restaurant she's part owner in with friends Toni and Petra.

All three women have one thing in common which is they've all lost their husbands. Suzanne's husband Walter has died at an early age, Petra's husband is in a home where he has Alzheimer's and Toni is separated from her husband, Junior. The three are their own support system while running the Cackleberry Club.

Author Laura Childs really doesn't hit a homerun with this mystery, which is the first in the Cackleberry Club line. Childs is best known for her other lines of mysteries which include the Tea Shop Mysteries and Scrapbooking Mysteries.

While this book really doesn't go anywhere it's sort of broken down into three different novels. There's the mystery part with Suzanne trying to figure out who Bobby's killer is (and I have to say as soon as I saw the character was introduced I knew who it was) then there's a cult Suzanne gets involved with and finally a potential scandal which would give the dead Walter a bad name in the community.

Many times I kept asking myself what was I reading? It's clear early on in the book that two files are lifted from Bobby's office which deal with Walter and the cult but, there are too many suspects in this small town of Kindred (and I think every one in town is mentioned).

On the plus side of the book there are 12 recipes so if you don't like the book you can try out the recipes! 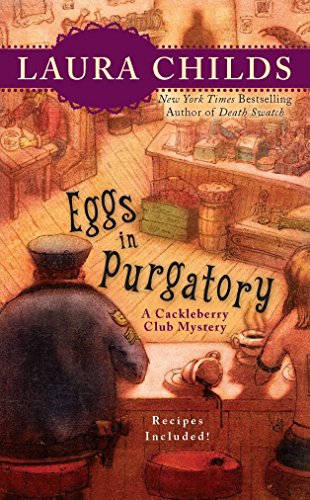