Sometimes miracles come true, and as hard as I prayed, I didn’t get a miracle. However, it was a miracle that this series was published.

No matter how I tried, I just could not find anything worth salvaging.

As this series begins, it’s about three weeks before Christmas and dessert bar owner, Charity “Chase” Oliver receives an invitation for her fourteen year class reunion.

Actually, it’s a thinly veiled opportunity for former class president, Richard “Dickie” Byrd to unveil his plans to run for mayor. However, classmate Ron North, now a hack reporter, causes much discomfort for those in attendance.

Ron, who had an obsessive crush on Chase’s best friend, Julie, calls her out regarding a real estate scam and then forcefully kisses her. Her boyfriend threatens him and he disappears for awhile before causing other problems.

The next day, Chase is out with her cat, Quincy and Dr. Mike Ramos, where he’s helping her train the cat on a harness.

Quincy gets away and runs over to a bush where Mike finds the dead body of Ron. The cause of death was strangulation and Julie’s scarf is found at the scene.

With snowstorms, a baking contest and a Christmas wedding coming up, Chase has to clear Julie’s name so that she too can walk down the aisle.

High school reunions are always a good topic and it was kind of refreshing for a change, but what didn’t make sense was when Chase asks Mike if he wants to go. He agrees then at the last minute remembers he had to go to a veterinarian conference for the day. In New Mexico. Really, who would go to a conference for one day in New Mexico, when you live in Minnesota?

While Cantrell uses a pen name for this series, Chase does read a book by the authors real name. She also mentions other character names from other cozy authors in the first installment, something I forgot to mention in an earlier review.

The series could have been good, but for me, I hope there are no future installments. 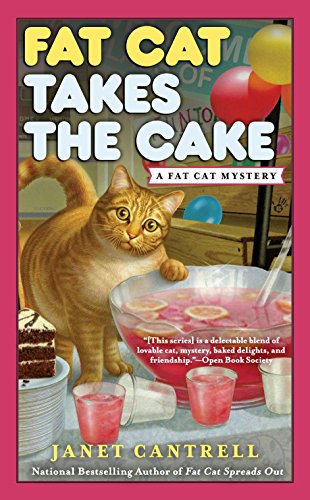