With great trepidation, I was afraid that while reading the last installment of this series, I would find myself banging my head against a wall. Instead, I was grateful that this was entertaining and will undoubtedly hold your interest.

Near the end of the second installment, Zoe Chase is approached by Tiffany Bryant, the coordinator of the food trucks for the upcoming carnival for carnival in Mobile.

Zoe accepts the offer and as this installment begins, she has been going to society parties with her father, Ted, while preparing the Biscuit Bowl for the next two weeks.

At the secret Mistics of Time ball, Zoe takes a breather and goes outside for a breath of fresh air when she discovers the body of Jordan Phillips, a local newspaper reporter.

While membership into the Mistics is secret, the guests hurriedly leave and the death is quickly covered up. However, it is reported in the news, but the body had been moved into an alley.

Zoe becomes furious because she knows that there’s a cover up and later learns that Jordan is the son of the paper’s editor and grandson of the previous editor/owner.

She’s warned repeatedly to stop looking into Jordan’s death (it’s reported as a suicide) and a few days later her father is injured at a bar while out celebrating.

After getting a hold of Jordan’s phone, she gets a call on it from another reporter convincing him that it is Jordan (but with a cold) they meet later that night.

Disappointed that he’s been duped, the reporter tells her that he’s leaving town and will meet her in a few minutes with the information that he was going to give to Jordan.

Zoe thinks that he’s left town when he doesn’t show and after doing some research she finds out where he lives and goes to his apartment, where she finds him dead.

In order to stay alive, she now needs to look into two murders while learning about the secret societies of Mobile.

Had this series been written like this last installment, this would have been a roller coaster of a series.

Everything about this installment is great with the carnival atmosphere and the problems that arise from having to work at the truck.

The regular characters have grown and the new characters are written with ease that they seem to jump off the page.

However, for everything good there has to be a bad and readers will not be happy with the ending. It was something that I didn’t see comin.

One of the takeaways from the book is the amount of history that is covered.

I had no idea that Mardi Gras originated in Mobile, Alabama and there were times I was looking up the city on more than one occasion.

As with the previous installments, you’ll find recipes at the end. 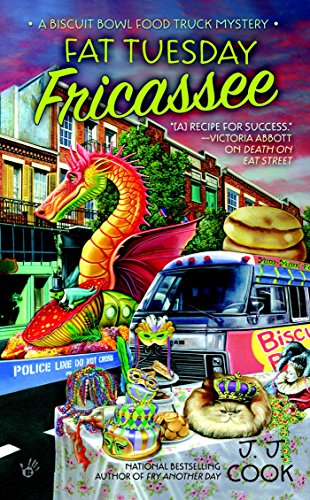