The premise for this installment was intriguing, but, I'm not sure where I had lost interest in what was going on.

As the story begins, Nell Pratt is attending a luncheon, along with new hire, Shelby Carver in an effort to raise grant money for the Pennsylvania Antiquarian Society since funds are tight. Nell begins to introduce Shelby to some of the movers and shakers and meet Jennifer Phillips from the Fireman's Museum.

Just as the speakers begin (and lunch is being served) Jennifer receives an important call and finds out that the warehouse for her museum is on fire and scans the crowd for her boss, Peter Ingersoll. The two leave and the next day Nell receives a call from Peter.

He tells her that the museum was undergoing renovations and all of the collections were destroyed in the fire. Nell offers to help by having her employees go through their collections and see what they can give to Peter.

However, she notices in one of the photos that the fire engine is different from the one that was destroyed at the museum.

Special Agent James Morrison calls her to find out if she has any information on Ingersoll and she tells him that she's just met him and tells him about the fire engines. She's also asked a couple of the staffers if they notice anything different, to which they agree.

However, prior to the Fireman's Museum fire, a few other unexplained warehouse fires had occurred and a few after. Nell asks Morrison if there's an arsonist on the loose and he tends to think that there is.

Which makes Nell nervous since her museum wouldn't take any time at all to go up in flames, since most of the collections are old papers and books. She decides that she should review the fire system (because you know there's going to be an upcoming fire!).

With really nothing to go on, Morrison asks Nell to dig deeper into the lives of the employees at the museum even if it brings danger to herself and others. At first she refuses, but then decides that it wouldn't hurt since she does need to get to know the higher ups at various museums throughout the city.

Both she and James begin to figure out that the death of the guard at the warehouse (an ex firefighter) could have been murder and besides an arsonist they have to figure out who may have killed the guard.

What intrigued me the most about this installment was the fact that there was an arsonist running around the city and it would have been a little more interesting if there had been a few other fires that would have moved the story forward. Instead, its just mentioned that the fires were random and it's not clear if they were related in any way. I think maybe the arsonist should have targeted a smaller museum or two and then it could have been a much broader story.

Instead, Connolly has Nell doing her favorite activity: going out to lunch. This character has more lunches than any other that I've read! Everytime you turn a page, it seems like she's asking her assistant, Eric, if she's free for lunch and off she goes to the next restaurant. I have to chuckle though because once she gets back to the office, she's always complaining about being behind in her work.

One of the problems with this series (it had been awhile since I read the first installment) is that everything takes place at the library. I get it, but, half the time I'm not sure what type of character Nell is supposed to be.

I don't think she does either.

As a career woman, she's unsure a lot of the time and doesn't know what type of president she's supposed to be. She wants to be hands on, but at the same time, she comes across as a bitch who just wants to do her job and not really help the others.

An example is back in the second installment after she hires Eric on a trial basis, she tells him that she doesn't expect a lot and if he's going to get himself coffee, he can fetch a cup for her. It's classic Working Girl dialogue. But, he's always going to get her coffee anyway and makes sure that she has it as soon as she comes into the office.

I don't know, but there's at least five more installments to go and hopefully, Nell will grow into a fine character. 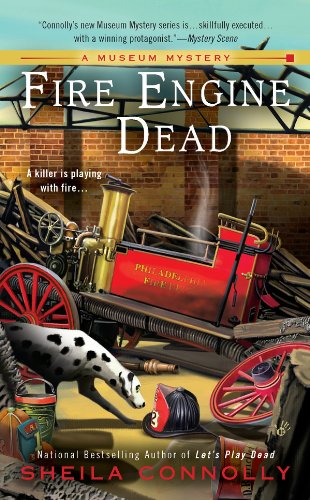