"...somebody must have known it was time for us to get back together and sent me here to wait for you." -Rudy the Yorkiepoo

A decade earlier when Ellie Engleman went on her honeymoon she came back to find her beloved pup Rudy dead. Now divorced she stands in her local ASPCA in New York looking for a four legged companion when she hears a childlike voice. It doesn't take long before Rudy informs her he's back, only in a different body.

The setup for this first mystery finds Ellie newly divorced and starting her own business as a New York City dog walker. It seems like an ideal job for her but who knew it was so cutthroat? Not only is she vying for new clients, but she's stepped on the toes of two professional dog walkers, Bibi and Eugene. These pros hate Ellie since their clients are turning to her for her services.

On a nice spring morning she heads to Professor Albright's apartment to pick up his Westminster Best in Show Bichon Frise, Buddy. Ellie has a hard time getting into the apartment and discovers the professor dead and Buddy missing.

She makes it her mission to find the bichon before its too late and through the course of the book two other prize winning dogs disappear. As she does some investigating on her own, she meets Det. Sam Ryder who thinks she might have something to do with the disappearances since she happens to show up at the "crime scenes" before he does.

He thinks her theories are a little off the wall but when he delves deeper into the case of the murder things aren't as crazy as they appear to be.

At the same time the two of them do a little flirting (much to Rudy's dismay) and Ryder does look at Ellie as though she's eccentric since he doesn't know about her ability to talk, not only to Rudy, but to her other charges.

Throughout the couple weeks we spend with Ellie we discover an abundance of characters which will certainly expand within future mysteries.

One of the great advantages of buying this book is McCoy will be donating her royalties to Best Friends Animal Society (www.bestfriends.org).

And be sure to have a tissue handy throughout the read. 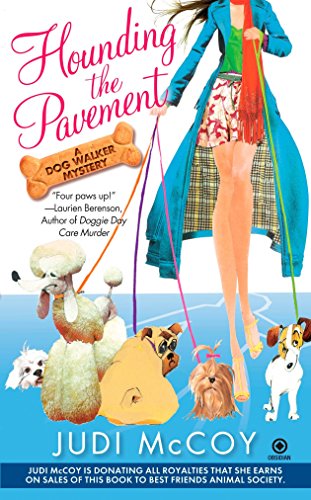