After two previous installments which didn’t amount to anything, I have to pay myself on the back for getting through this series.

Following an engagement party for one of her clients, Giovanna “Gigi” Fitzgerald, discovers the grooms father dead in the parking lot, an ice pick to the head.

The prime suspect in this murder is bar/restaurant owner Declan McQuaid and Gigi is stunned since she wasn’t aware of an earlier argument between him and the deceased. As a favor to Declan, she volunteered to help at the party, even though she was an invited guest.

Gigi’s interest in clearing Declan also involves her sister, Pia, who has come to town (unexpectedly after breaking up with a guy overseas) and thinks that Declan could be “the one.”

When another close tie to Declan is found dead, Gigi is now more than ever to find the killer and to clear Declan, while trying to figure out Pia’s lifestyle and future.

Sure, there are two murders (in the series there are a total of six) but by this point in the series, you just don’t care. The only thing I cared about was how long it would take to actually finish the book.

Also, we have the budding romance between Gigi and Detective Bill Mertz. It’s always a given in a crimozy, but, Cochran really dumbs him down in this installment. He asks her about pillows on a couch and she explains that they’re called “throw pillows.” I cringed.

While there are still inconsistencies (obviously no editor was available) the one consistent action is the treatment of Gigi’s dog, Reggie.

He generally goes with her on her food deliveries, yet spends a lot of time locked up in the car. Since the book is set around Valentine’s Day he spends time in a cold car alone.

Cochran also writes under the name Meg London and I did review the Vintage Lingerie series. If memory serves me, I think I enjoyed it more so than this series and I would recommend that series over this. 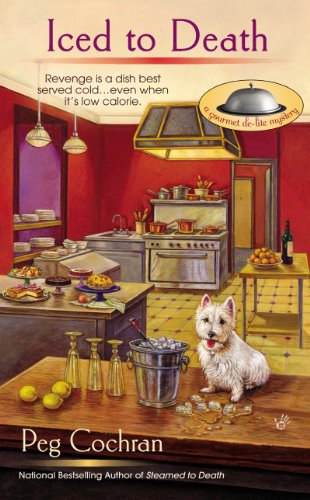