Life of the survivors of the merciless attacks are starting to get back to normal again. However, the evil forces have not been fully sweeped -- Ortaks and thousands of demons, vargs, necromancers, and dark elves still aim to conquer and kill as many as they can.

On the good side, Queen Egny and Princess Tania’s Army are massively growing -- hundreds of the captured Ortaks have joined Her Majesty, and the Barbarians have formed an alliance with Princess Tania. With more heroes and heroines uniting to protect the world of Esthopia from evil forces, will they be able to defeat the immense number of enemies that surround them?

Without giving too much details to avoid spoilers, these are the things that I like about this book: (1) The unexpected team up between Gretar and Oskar, (2) Prince Storgard’s thoughts about changing the perception of Barbarians towards elves, (3) Queen Egny and Princess Tania’s growing army and lastly, (4) The triumphant battles against evil forces.

This book has the most triumphs, but the casualties are devastating, and this is the main thing I dislike about war stories -- losing innocent people or surviving with trauma. I had to watch cartoons to forget about Geirny’s misfortunes in the story but at the same time, I am also looking forward to reading the last book because I need to know who would survive this war ‘til the end.

Overall, I am rating this 4 out of 5 stars. The character developments that I wanted started with Books III and IV but then in this book, there weren’t much progress with my favorite characters. It was still an awesome read; it felt more like I was watching a blockbuster movie. To simply describe it, Invasion of the Ortaks: Book V Barbarians by Sveinn Benonysson is INTENSE. I recommend it to all fantasy lovers who have read Books I – IV but my recommendation is limited to mature readers due to its violent and sexual content. 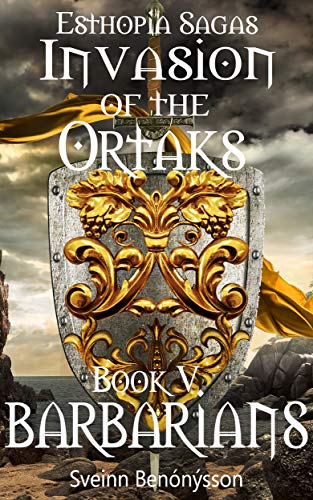