Rumors of the vast and fertile lands of Esthopia reaches King Haldor, his half-brother, and the rest of the Vikings. The said rumors give hope to the troupe when a ship arrives early autumn at their shore and Richard, the captain of the ship, confirms that the information they know is true. They also learn that five of the kingdoms are in peace and bound by family ties except for Hergia. The Vikings then sail all the way to Hergia with the intention of creating a new home for themselves. However, news of four thousand Ortaks residing in a remote village displeases them, so they decide to invade and kill them all. Will the Vikings end up as an ally to Queen Egny? Or is their existence another big threat to Esthopia?

Invasion of the Ortaks: Book VI Vikings by Sveinn Benonysson continues with new characters, places, and a plot twist that will make the readers eager to keep on reading it ‘til the end. There are many things I like about this book: (1) Trinserant and his interesting ability to be invisible and to make others invisible, (2) The real truth about the Underworld that the elves and the barbarians uncovered through Trinserant, (3) The amusing moment of Trinserant showing off his ability, (4) The development in Geirny’s story, (4) Wolf Tyr’s effect on Tania, (5) Gil and Asgrim’s journey and encounter with Antea, (6) Axel’s battle with the outlaws, and lastly (7) Queen Egny and King Haldor’s meeting.

Despite all the things I like about this book, I am giving it 4 out of 5 stars because there could’ve been more progress in my favorite characters. I wanted more of Sir Klaus, Asgrim, Queen Egny, Christmund, Tania, Shadow, and Tyr. They are such compelling characters that make me hungry for more of their story so I hope that the author would write more about them.

I highly recommend this book to mature readers who have read Books I – V. This book has impressive war tactics and jaw-dropping action moments that make all the battles alive as if the author has experienced these wars in Esthopia himself. To describe it in one word, this book is THRILLING. 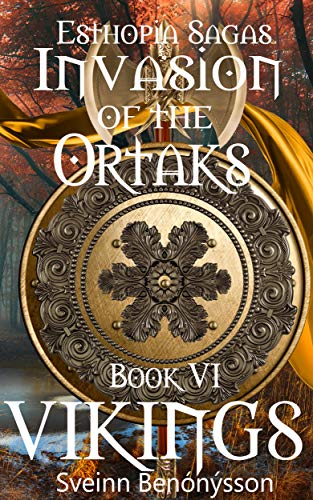