Book Review: Ladle to the Grave by Connie Archer

I really have to give Connie Archer credit when it comes to this series. Even though plot lines have been used in the past, she's made a way of keeping everything fresh.

Which brings us to the fourth installment of the series.

Lucky Jamieson's best friend Sophie is getting married to By the Spoonful's chef Sage DuBois. The happy couple have planned a small wedding and reception, but for some reason, half the town thinks they're invited and whenever anyone talks to Lucky, she doesn't know what to say.

For that fact, Sophie doesn't know either and for a change doesn't come off as a Bridezilla as many characters were in past crimozies. In fact, Lucky has been planning things behind the couple's back and is terrified that they'll find out. She wants this to be a gift from her, her grandfather Jack and boyfriend Elias.

While Lucky's busy planning a wedding, Agnes Warner is busy dying in the woods when some of the ladies in town decide to have a pagan celebration in the woods.

Following Agnes' death, Sophie takes Lucky up to the cabin that she co-owns with her older and estranged brother. While there, she tells Lucky that she and Sage want to live here, but she hasn't heard from her brother and the resort that Sophie works at is also interested in the property.

As Sophie roams around the property, she finds a dead man floating in the creek and it's assumed that the body is that of Sophie's brother and once this happens, Jack is the prime suspect in the death of Agnes Warner. He picked some of the herbs for the May Wine that Cordelia Rank was making for the celebration and none of the women claim to have seen it after Jack.

Per usual, Archer has solid plot lines going on, but the pagan celebration and interest start in the third installment with the reveal of Janie's father, who is part of a gypsy band. I think because that storyline was somewhat interesting, but the way it was presented was a little boring, so I blocked it out of my mind.

While I recommend this series highly, for me at least, I couldn't wait to get to the last installment since it was pretty much binge reading and my mind was on overload. Recently, I had read a similar storyline when it came to the herb mishap, so it was one that I kind of knew how it would end up. 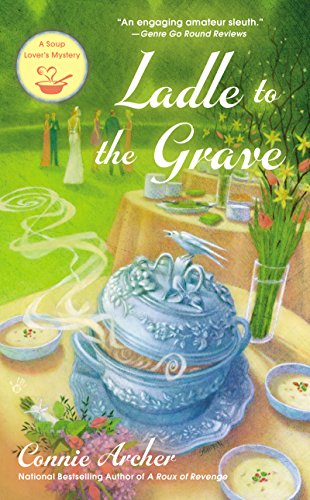